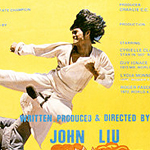 But on his last day he fights a guy who does not want the dragons, just the honor of challenging the greatest fighter, and as a fight connoisseur himself he’s cool with that. But then he gets jumped by another guy so he gives the dragons to the first guy and makes him promise to take care of his son. Personally I would be like, “Well, I mean, I’m flattered, but I wasn’t really looking for that type of a life time commitment here,” but this guy is more responsible so he becomes John Liu’s adoptive father. END_OF_DOCUMENT_TOKEN_TO_BE_REPLACED 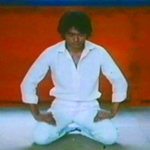 But at least it’s true that he’s in the claws of the C.I.A. So the title is based partly in truth. END_OF_DOCUMENT_TOKEN_TO_BE_REPLACED 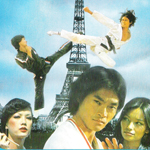 AVENGING NINJA is a movie with no ninjas, and no vengeance. And I don’t think it’s a metaphor, either. It’s just the marketable American video title for a Taiwanese/Hong Kong production that also goes by the more accurate title ZEN KWUN DO STRIKES PARIS.

The movie, which is produced by “John Liu’s (H.K.) Film Corp.”, stars John Liu, a Taiwanese martial artist who was in the SECRET RIVALS trilogy and INVINCIBLE ARMOUR, or “successor to the immortal Bruce Lee legacy,” as the oversized VHS box calls him. And he directs, writes and produces. Also he’s playing himself, John Liu, movie actor and founder of the Zwen Kwan Do fighting system, which he pits against various champions of different disciplines and nationalities. The credits list the championships of the five top-billed actors (“JOHN LIU 1964, 1967 World Karate Champion”). Also there are three names under the category “Top French Movies & TV Stars,” and somebody named “Brigitte Mannequin.” I’m not sure who that is, but I like her.

As the movie begins it’s in the news that John Liu, the disgraced martial arts teacher now working in the Hong Kong film industry, has been summoned to Paris to investigate the kidnapping of his father, a “well known American aerospace scientist.” He’s in no hurry though. He’s still filming a movie, and is told to slow down his moves so the camera can get them, something they used to say happened to Jet Li. But maybe they said that about everybody. END_OF_DOCUMENT_TOKEN_TO_BE_REPLACED