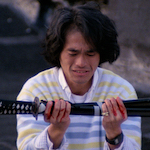 Luckily, the footage happened to be included in a library acquired by Vinegar Syndrome, the excellent blu-ray label that started out restoring vintage porn movies before becoming one of the premiere curators of cult horror and action (PENITENTIARY I & II, DOLEMITE, MARTIAL LAW I & II, THE BEASTMASTER). According to Re-Enter the New York Ninja, a 48-minute featurette that will be included on physical releases of the movie, when they asked what the reels were they were told they could throw them out if they wanted. Instead they watched them and found a movie you can imagine the company acquiring intentionally, had it previously existed: a pulpy, somewhat campy but very sincere revenge movie with Liu battling cartoonish gangs and a mutated serial killer on the streets of New York (sometimes with noticeably unsuspecting extras). END_OF_DOCUMENT_TOKEN_TO_BE_REPLACED