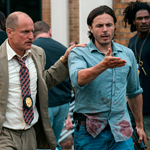 The movie opens with a carload of sweaty, dangerous men discussing and then launching into a credits-sequence daylight bank robbery. It’s only after their messy escape (which includes a van driving fast through traffic while filled with red dye pack smoke and machine guns fired on gridlocked civilians) that we see the badges come out and realize that most of these guys are cops. (Others, we hear later, are “special ops guys” turned private security contractors.) They actually change out of their stained clothes and go straight to work. That’s a long day! I bet they smell pretty ripe, too. END_OF_DOCUMENT_TOKEN_TO_BE_REPLACED

Remember after THE ROAD director John Hillcoat had this movie called THE WETTEST COUNTY IN THE WORLD that was written by his THE PROPOSITION writer (and famed singer) Nick Cave, he had at-that-time-hot-stuff Shia LaBeouf signed on and everything but nobody would fund the fuckin thing. Then suddenly a mysterious benefactor named Megan Ellison comes into Hollywood and gives him money and gives P.T. Anderson money to make THE MASTER and Andrew Dominik to do KILLING THEM SOFTLY and a bunch of other guys like this. So the legends were true, there are some good rich people out there.
END_OF_DOCUMENT_TOKEN_TO_BE_REPLACED

In case you don’t watch Oprah, the story is about a man and his son after civilization has been destroyed by some unnamed disaster. They’re cold, hungry and worn out and trying to push their little cart of belongings across the United States to the coast. They don’t even really know what they expect when they get there, they just don’t know what else to do. END_OF_DOCUMENT_TOKEN_TO_BE_REPLACED 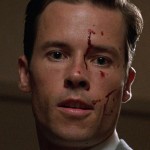 This is a western, but it takes place in Australia. I’m not familiar with the geography of Australia, for all I know this takes place on the East Coast, but oh well. It’s a western. END_OF_DOCUMENT_TOKEN_TO_BE_REPLACED