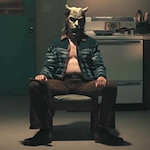 It’s a pretty tight movie, but I appreciate that it doesn’t rush the section where it establishes Finney’s daily life and the ominous mood of the place and time. One day there’s a fight outside of school, some big creep named Moose (J. Gaven Wilde, HALLOWEEN KILLS) calling a smaller kid named Robin (Miguel Cazarez Mora) a slur and taking a swing at him, at which point we learn that Robin is some kind of junior high Billy Jack who this kid absolutely should not have fucked with. Finney doesn’t know how to do that when he gets chased into the restroom by three dickheads, so it’s a relief when Robin walks in. Turns out they’re friends, though I get the sense it’s one of those friendships where one (Finney) is in awe of the other and feels surprised and lucky the guy even talks to him. END_OF_DOCUMENT_TOKEN_TO_BE_REPLACED