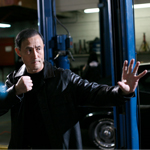 Jack is introduced using this technique to massacre a room full of people at a gangster’s birthday dinner, leaving only one terrified witness to give his boss the message that “my part of the deal is done.” Then we find him six years later living as an ordinary dude with an unnamed regular job, living with his teenage niece Jaime (Kelly Lou Dennis) who he’s raised as his daughter since the death of her real father. But one day the boss finds out this was a scam – ol’ brother-in-law faked his death to escape a debt. So masked men burst in and try to kill Jack and they kidnap Jaime and just for good measure they intend to traffic her. So… they’re bad guys. END_OF_DOCUMENT_TOKEN_TO_BE_REPLACED 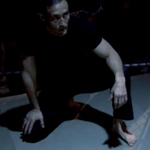 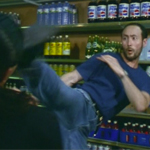 Writer/director/producer Jino Kang plays Jack Lee, a cop who also practices Hapkido and runs his dad’s mini-mart. In the opening scene he combines all three by fighting and arresting a colorful gang of thugs who come in looking for protection money. END_OF_DOCUMENT_TOKEN_TO_BE_REPLACED 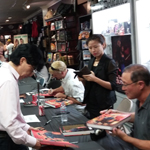 “It’s about action stars, not action movies,” david kept telling people as he signed their books. He’d wanted a different subtitle that made that more clear. Rather than trying to catalog everything that could technically qualify as an action movie – which could end up being half super heroes and transformerses and shit – he chose to zero in on the dying art of the action star vehicle. I remember him calling me for counsel on this issue a few years ago. I don’t think I was much help, but I agreed with his eventual decision to limit it to actors who primarily or exclusively do action, and (with a few exceptions) started as martial artists or athletes. That means no to my boys Bruce and Clint, sorry to say, but yes to JCVD, Cynthia Rothrock, Jerry Trimble, Michael Dudikoff, Olivier Gruner, ex-diver Jason Statham, and plenty of people I’m not even familiar with. People who never had books about them before, who you never thought would have books about them. (He does include Bronson, Stallone and Schwarzenegger, if you’re worried.)
END_OF_DOCUMENT_TOKEN_TO_BE_REPLACED