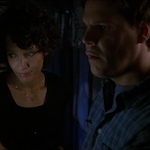 The new spin they came up with, as indicated in the subtitle, is that most of the people on this flight, including our intrepid heroes, have a phobia of flying. They’re part of a class trying to overcome said fear first in a simulator and then on an actual flight from Seattle to L.A. And they’re not very relaxed about it since one of the flight attendants accidentally left the intercom on while talking about a storm that will make the flight “Hell.” END_OF_DOCUMENT_TOKEN_TO_BE_REPLACED