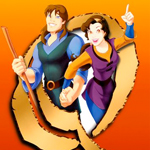 The operative word being “tried.” This is a terrible fucking movie. Nothing can compare to FOODFIGHT!, but as far as professionally completed animated features given a wide release in theaters, QUEST FOR CAMELOT (a.k.a. THE MAGIC SWORD: QUEST FOR CAMELOT in some countries) is one of the worst I’ve watched all the way through. The shamelessness with which they try to copy Disney, combined with the clear lack of understanding of why people like the stuff they’re trying to rip off, and the substandard execution of it, is honestly depressing to watch. Like any animated feature there are surely many talented people who worked on it, but it’s very obvious that the direction at the top came from a bunch of clueless executives who just had no respect for the audience or the art form, and no idea what the fuck they were doing. END_OF_DOCUMENT_TOKEN_TO_BE_REPLACED