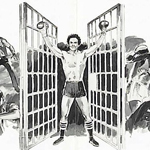 Our hero is Martel “Too Sweet” Gordone (Leon Isaac Kennedy, HAMMER, LONE WOLF MCQUADE), who we first see as a homeless man sleeping in a little tent near a highway. He’s woken up by white dudes off-roading on motorcycles. Hitchhiking, he gets picked up by Linda (Hazel Spear, DISCO GODFATHER), a dream girl with a flower in her hair, driving a cool van. She explains that most people wouldn’t pick up hitchhikers on this highway because there are both men’s and women’s prisons nearby. END_OF_DOCUMENT_TOKEN_TO_BE_REPLACED