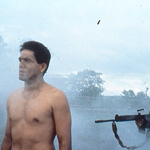 We see how that works: they come into town, spray some bullets around, throw the young men on the ground and tie them up. While they’re there Eddie doesn’t really know what’s up yet, but he wanders into an old lady’s kitchen and gets an earful about his side and how she hopes he dies. He takes one of the tortillas she’s making and eats it, so maybe he’s more of an asshole than we realized. END_OF_DOCUMENT_TOKEN_TO_BE_REPLACED 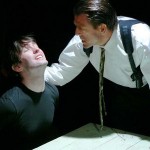 Now, we the audience aren’t retards. We know he’s in some sort of room where he keeps his camera equipment, because he’s standing in front of a bunch of camera equipment. Mark is a grown man and has directed documentaries before, but he clearly doesn’t know about “cinema verite,” also known as “direct cinema” or “good documentaries.” Haskell tries to explain that he shouldn’t have to say where he is, the audience will know where he is by watching what he’s talking about, seeing his surroundings, watching what happens. But Mark isn’t having it. He keeps asking Haskell where he is, and Haskell flips out. Immediately I knew I liked the guy. END_OF_DOCUMENT_TOKEN_TO_BE_REPLACED