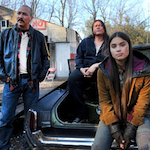 RHYMES FOR YOUNG GHOULS (2013) was the first of two features by writer/director Jeff Barnaby. I didn’t know about him until I saw his really good 2019 zombie movie BLOOD QUANTUM, at which point I was excited to follow this new director who was around my age and seemed real interesting in interviews. Tragically that was his last film – he died of cancer last month. That’s a real damn shame, but I encourage you to check out his small body of work. He’s got a real interesting perspective as a guy whose politics grew from seeing some shit growing up in the Mi’kmaq reserve in Quebec, but his genre influences taught him to make movies from that point-of-view that are entertaining, not strident.

While BLOOD QUANTUM is straight forwardly Barnaby’s take on the zombie post-apocalypse genre, this one is something more distinct. It’s kind of a small time crime tale, set (like BLOOD QUANTUM) in a fictional reservation called Red Crow, but in 1976 (the year Barnaby was born). Reservation Dogs star Devery Jacobs (credited here as Kawennáhere Devery Jacobs) plays Aila, a teenager who has been running the family weed business since a drunk driving accident killed her brother and mother and put her father in prison. END_OF_DOCUMENT_TOKEN_TO_BE_REPLACED