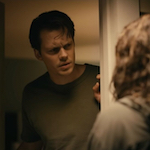 The trailer for BARBARIAN suggests an intriguing and pretty straight forward horror-thriller idea. Tess (Georgina Campbell, KING ARTHUR: LEGEND OF THE SWORD) shows up at her Airbnb late on a rainy night and discovers that somehow someone is already staying in it. It’s a scary neighborhood on the outskirts of Detroit, so the other renter, Keith (Bill Skarsgard, ATOMIC BLONDE) lets her come in while they try to figure out what’s going on. They can’t get ahold of the owners, so she sneaks a photo of Keith’s driver’s license (just in case) and reluctantly accepts his offer to take the bedroom while he sleeps on the couch.

He seems very polite and cute, but of course that’s a reason not to trust somebody in a movie like this. Plus the motherfucker played Pennywise! So when weird shit starts happening and she finds a scary secret door in the basement you try to figure out if he’s up to something or if they’re both in trouble together or what. And you can sort of see where it would go from there.

Or that’s what it seems like. One question: why BARBARIAN? Why not, like, OVERBOOKED or SCARE BnB or whatever? Well because it goes a little further off that set up than you might expect, and I’m glad I heard that because it inspired me to go see it opening day. END_OF_DOCUMENT_TOKEN_TO_BE_REPLACED