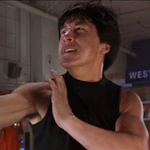 Most of those were about a certain poetry, a certain vibe, a mix of style and cool and honor and brotherhood and violence that seemed thrilling compared to what we got at home. But the excitement of Jackie was entirely about the miracle of human movement. A guy who can flip and run up walls and jump off buildings and onto or over moving vehicles. A daredevil and a silent comedian and a kung fu master all rolled into one. He wasn’t cool in the same way that Chow Yun Fat was. He was kind of a dork. But also a god. END_OF_DOCUMENT_TOKEN_TO_BE_REPLACED