I’d never watched it back-to-back with part II before. That really emphasizes the differences. Though I praised the J.J. Perry fight choreography in II, Larnell Stovall’s work here is something to behold. More fights, longer takes with more consecutive moves, different styles (more throws and groundwork, and capoeira courtesy of Lateef Crowder). As much as I love and don’t want to take away from the classics like KICKBOXER and BLOODSPORT that inspired movies like the UNDISPUTEDs, I think it’s fair to say that the choreography and filming of martial arts sequences has gotten far more sophisticated since those days. END_OF_DOCUMENT_TOKEN_TO_BE_REPLACED 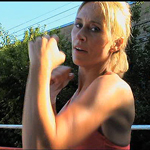 What I’m saying is BARE KNUCKLES was an underdog. A Cinderella story. Cinderella Man, but with a lady… and it makes us all proud. It’s a little ragged and cheesy at times, but it’s a really likable take on alot of the genre tropes, feeling a little different without ever reinventing anything. END_OF_DOCUMENT_TOKEN_TO_BE_REPLACED