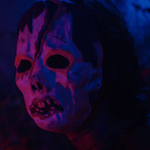 There are a bunch of similarly themed and named movies of recent vintage – this is the 2019 American one with a clown mask on the poster. I didn’t know until afterwards that writer/directors Scott Beck & Bryan Woods are the guys that wrote A QUIET PLACE. END_OF_DOCUMENT_TOKEN_TO_BE_REPLACED