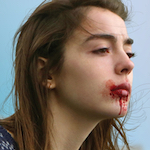 This is a great movie. The directorial confidence is immediately striking, but you have to flow with it a while to realize just how original it is, how much it doesn’t follow any existing template. Ducournau told The Guardian “It’s not even a horror movie, even though I love horror movies.” It’s a coming of age story about a young woman starting college, with very relatable emotions painted in extreme, horrific strokes. It definitely doesn’t follow any traditional genre structure. But Justine’s school troubles include some repulsive body horror, some gore, and yes, some munching on flesh. We’re not talking Leatherface style – more like impulsive biting. Snacking, really. The simplicity of it, and the time it takes leading up to it, investing us in the people who do it, is what makes it harder to take than in so many other movies. END_OF_DOCUMENT_TOKEN_TO_BE_REPLACED