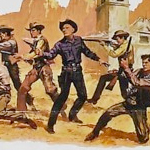 The opening, introducing the plight of another (or maybe the same?) Mexican village at the hands of another group of Mexican bandits (all of the men are run off into the desert at gunpoint) is dishearteningly dull. But this is our connection to the first film – Chico (Horst Buchholz), the young fighter who stayed to live in the village because he fell in love with Petra (Rosenda Monteros), is one of the men captured, so Petra knows to go try to find the great Chris Adams to help. END_OF_DOCUMENT_TOKEN_TO_BE_REPLACED