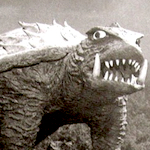 The Gamera movies were created by Daiei, the studio founded in 1942 that produced Akira Kurosawa’s RASHOMON, Kenji Mizoguchi’s UGETSU and SANSHO THE BAILIFF, and also the Zatoichi, Yokai Monsters and Daimajin series. This one was clearly made to compete with or cash in on Toho’s popular Godzilla series, but that’s odd because it’s a black and white movie where one monster is awakened and attacks Tokyo, not another monster. By this point Godzilla had done three color films and had been fighting other monsters for a decade. And it wasn’t as if most films were black and white then – Daiei’s own Zatoichi movies had switched to color. Was this made for people nostalgic for the original GOJIRA (which was eleven years in the past at that point)? Were they trying to make sure the world had a movie like GOJIRA but not a total bummer inspired by the bombing of Nagasaki and Hiroshima? And is doing that kind of like how KONG: SKULL ISLAND mimics all your favorite Vietnam War movies without all the horrors-of-the-Vietnam-War darkness? Uh, not really. They were just trying to save money. More on that later. END_OF_DOCUMENT_TOKEN_TO_BE_REPLACED