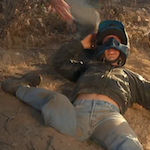 Stewart directed three more movies in the early ‘90s (CLICK: THE CALENDAR GIRL KILLER, CARTEL and HIDDEN OBSESSION) before doing 14 episodes in the first two seasons of Mighty Morphin Power Rangers. He continued to work in stunts (including as stunt coordinator for LEPRECHAUN 3 and CHILDREN OF THE CORN 666: ISAAC’S RETURN) but didn’t direct another feature until 2007, when he made FALL GUY: THE JOHN STEWART STORY. Yes, an autobiopic. He’s played by Jason David Frank, the Green/White Power Ranger. END_OF_DOCUMENT_TOKEN_TO_BE_REPLACED