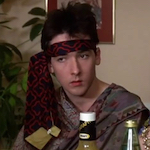 And BETTER OFF DEAD is an even odder one. It has a pretty normal premise (high school kid gets depressed when his girlfriend dumps him for the captain of the ski team, thinks he can get her back by defeating said captain in a ski race), but it’s filtered through the distinct humor of first time writer/director Savage Steve Holland. Though I don’t personally hold it in nearly the same reverence, I think it has a little bit in common with PEE-WEE’S BIG ADVENTURE, in that it’s a comedy with its own distinct tone and deadpan presentation of absurdity brought to us by a rookie whose ignorance about how to make a normal movie works as a strength. On a more superficial level, it uses little bits of animation (including stop motion), and jokingly applies thriller film techniques to silly things (for example, using horror movie synths and atmosphere whenever the paperboy shows up looking for his $2). Burton and Holland are also the same age, both went to CalArts, and both worked as animators before becoming live action directors (in Holland’s case creating the famous “Whammy” animations for the game show Press Your Luck). END_OF_DOCUMENT_TOKEN_TO_BE_REPLACED 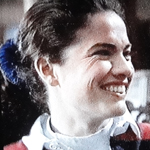 Both movies have a similar view of Tonya: her dad taught her boy things (shooting guns, shooting pool, fixing engines), her mom abused her, her step brother abused her, her husband abused her, she got swept up and either didn’t know or didn’t fully understand what these guys were doing on her behalf. Would you believe that both movies have a part where the fourth wall is broken to directly accuse the viewer of contributing to the abuse and exploitation of Tonya Harding? In this one it doesn’t come from the actor playing Harding, it comes from the actor playing the screenwriter of the TV movie! END_OF_DOCUMENT_TOKEN_TO_BE_REPLACED