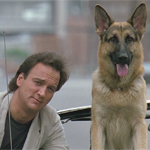 It’s humor that often seems more for kids than adults, yet every single other aspect of the movie – the car chases, the bar fight, the shootouts, the angry chief, the arrogant, swimming-pool-lounging drug lord villain (Kevin Tighe, ROAD HOUSE), the relationship problems caused by his occupation, the dramatic score, etc. – is 100% standard issue PG-13 (when that was edgy) action movie. And I don’t mean as a parody, mimicking the style to get laughs from absurdity. They’re just making a movie how movies were made back then. It wasn’t weird at the time. END_OF_DOCUMENT_TOKEN_TO_BE_REPLACED