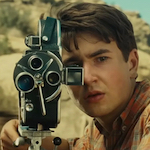 THE FABELMANS is the new Steven Spielberg joint that we can safely call the most personal of his career. At first glance it may seem like just another fictional story about a Jewish kid who makes 8mm movies in Phoenix, Arizona in the ‘50s and moves to Saratoga, California and his mom buys a monkey and his parents split up and he moves to L.A. with his dad and goes to USC and tries to break into the film business, but in my opinion it is not a coincidence that this character “Sammy Fabelman” was born at the same time as Spielberg to a similar family and lived in the same towns and did the same things and had the same experiences. From what I’ve read this is not even a loosely autobiographical story, but a pretty direct one about his childhood and specifically about what he got from each of his parents and why their marriage didn’t work out.

It’s also about him becoming a filmmaker, but those things are related. Just like Batman’s origin story, Spielberg’s starts with a kid being taken to the movies. (Had it not been for that mugger, maybe Bruce Wayne would’ve directed READY PLAYER ONE.) Five-year-old Sammy (Mateo Zoryon Francis-Deford) is in line to see THE GREATEST SHOW ON EARTH at a theater in New Jersey. He’s never seen a movie before and doesn’t really understand what it is, but he’s scared because he heard something about the people being giant. We get a handy encapsulation of his parents Burt (Paul Dano, TAKING LIVES) and Mitzi (Michelle Williams, SPECIES) in the differing ways they try to comfort him. Burt, a computer engineer, tells him about the projector and the projectionist, the still photos moving really fast, the concept of persistence of vision. Mom, a talented pianist, says it’s like a dream that you don’t wake up from. As Sammy grows up he’ll apply Dad’s scientific brain to his obsessions with cameras, editing and effects technology, and his mom’s artistic soul to everything else. END_OF_DOCUMENT_TOKEN_TO_BE_REPLACED