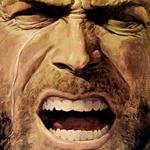 What we have here is a badass western revenge story. Clint directs and plays the titlational Josey Wales, who at first is just a regular non-outlaw family man. Then “redleg” raiders come through raping and pillaging, kill his boy and his wife, burn down his house, scar his face. Who knows how many days later he’s still just sitting there brooding on his patch of land when a squad of Confederate guerillas come by, tell him they’re at war with the bastards who did this. “I’ll be comin with you,” Josey says. END_OF_DOCUMENT_TOKEN_TO_BE_REPLACED