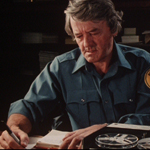 This is a lower-mid-level Slasher Search find. On one hand, it’s definitely not good, and doesn’t even have any heads chopped off or eyeballs poked out or anything. On the other hand it’s watchable. It has credible enough acting and production values, including some pretty good scoring at times (possibly from library music) and a couple decent oldies on the soundtrack because of the radio station. And of course there’s a little bit of the weird shit, which is absolutely required to get through one of these. END_OF_DOCUMENT_TOKEN_TO_BE_REPLACED