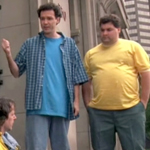 I remember wondering, has this thing been sitting on the shelf for several years? Or do things just look different in Toronto, where it was filmed? Or is it because it’s directed by Bob Saget? Yeah, I know, even back then, pre-THE ARISTOCRATS, he made sure everybody knew he was actually real edgy, man, he told jokes about penises and buttholes and you name it, everything. Nevertheless he was still the dude from Full House and America’s Funniest Home Videos. That is an incontrovertible fact. It’s the same guy. He did those things. END_OF_DOCUMENT_TOKEN_TO_BE_REPLACED