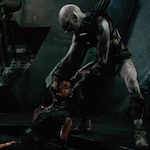 It has some overlap with what I call the Space Loneliness movies, because it’s about some people waking up from hypersleep during a 123 year interstellar trip. It’s different, though, because they’re not just the small crew of one ship like DARK STAR, ALIEN, BLOOD MACHINES, etc. The Elysium is built to carry much of the earth’s population to a new home on the planet Tanis, so it’s enormous, and when they run into other people they’ve never met them before. END_OF_DOCUMENT_TOKEN_TO_BE_REPLACED