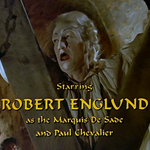 What is the premise? I’ve seen it, so I have a good guess. It’s about Genie (yes, that’s how it’s spelled), a young American woman played by Zoe Trilling (DR. GIGGLES, NIGHT OF THE DEMONS 2) who goes to Alexandria, Egypt to stay with her archaeologist father Dr. Matteson (William Finley, THE PHANTOM OF THE PARADISE, EATEN ALIVE, THE FUNHOUSE), meets a few people, experiments with her sexual boundaries and then gets chained up by some sadists. END_OF_DOCUMENT_TOKEN_TO_BE_REPLACED