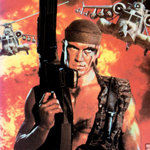 The 1980s. A time of sweaty chests and bandoliers. Half a decade after the smash success of JAWS, summer was cemented as the go-to season for mainstream crowd-pleasing movies. For the purposes of this study I’ve chosen to define summer movies as anything released from the beginning of April to the end of August – the months when kids are out of school, with some leeway at the front for Spring releases intended to play well into the summer. END_OF_DOCUMENT_TOKEN_TO_BE_REPLACED