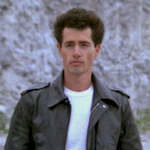 So yeah, there’s some DEFENDING YOUR LIFE and BEETLEJUICE type satirical fantasy in here, but he’s on that train until 1985, when he’s finally given his mission to help out clueless high school nerd Lenny Barnes (Jason Gedrick right before IRON EAGLE). END_OF_DOCUMENT_TOKEN_TO_BE_REPLACED