TEACHERS is kind of like the more realistic, less actiony version of THE PRINCIPAL. Kind of. If you buy that description then Nick Nolte would be Belushi, but before he’s transferred and promoted. He’s a beer drinking, too-hung-over-to-come-in-on-Mondays teacher at a high school where only a small amount of learning occurs. But instead of putting the blame on drug gangs and juvenile delinquents this one points its finger at a system that only focuses on the kids that are easy to teach and neglects the hard ones. The story takes place in the midst of a lawsuit against the school district for graduating a kid who didn’t know how to read. 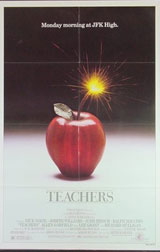 JoBeth Williams is the idealistic lawyer (and possible love interest) going up against the school. Morgan Freeman is the sleazeball pressuring the teachers about what to say in the deposition. This is mostly a story about adults, but it also follows a few of Nolte’s students: Laura Dern, Ralph Macchio and crazy fuckin’ Crispin Glover. It’s funny to see li’l Ralph Macchio talking tough – I don’t know if I buy that little fella as a streetwise car thief who protects his paranoid best friend Glover. I mean, I acknowledge that he wears a cool guy hat and talks with a New York accent, but I guess I need more. It’s not convincing me. Glover as a nutball who gets shot by cops – that I buy.

When Nolte finds out Macchio can’t read he makes him his personal project. But it’s tough when both the school and the parents just want the kid to pass whether or not he learns anything. No sooner than Nolte has convinced the kid to re-take a reading class do his parents come in and whine about the school can’t make him retake it since they already lazily gave him a passing grade. Ha ha, caught ya on a technicality, you can’t teach our kid how to read, fuck you.

But Nolte makes a connection with the kid, partly by letting him use photography for an assignment instead of a paper. And he figures out that he’s a smart kid. He doesn’t pick up on his potential for karate, though. So he’s not teacher of the year material, but maybe runner up or honorable mention.

Nolte is my favorite actor for playing burnt out guys like this. You can see why his students stick up for him in the inevitable “he’s gonna be fired” climax, even if he doesn’t get as many funny lines as Belushi did in THE PRINCIPAL. That one went down easier because of the action, but this one’s a little smarter since it doesn’t treat any of the kids as monsters that can’t be redeemed. It’s the school that’s fucked up. The one teacher who does keep an orderly class is so boring and distant that he gets through an entire period without anybody noticing that he died while reading the newspaper at his desk (SPOILER). And the one teacher who engages his class (by dressing up as historical figures and acting shit out) turns out to be an escaped mental patient. (That’s a little much in my opinion. Hollywood loves them mental patients. They just want to hug them and get wisdom from them and shit.)

By the way, Nolte wears some Hawaiin shirts in this, so that famous mug shot could be used for this character if they need to do a ROCKY BALBOA.

As many times as Belushi said “sonofaBITCH!” in THE PRINCIPAL, Nolte tells Williams in this one “You’re crazy!” or “You’ve got to be completely nuts!” So some variation on that has gotta be his catch phrase. The last time he says it she’s stripping naked in the hallway to prove herself to him. This was before camera phones and the internet so I think she got away with it. But she should be more careful.

Anyway, not too bad, although lacking in motorcycle chases.

back to school Crispin Glover Laura Dern Nick Nolte Ralph Macchio
This entry was posted on Wednesday, September 23rd, 2009 at 10:15 pm and is filed under Drama, Reviews. You can follow any responses to this entry through the RSS 2.0 feed. You can skip to the end and leave a response. Pinging is currently not allowed.