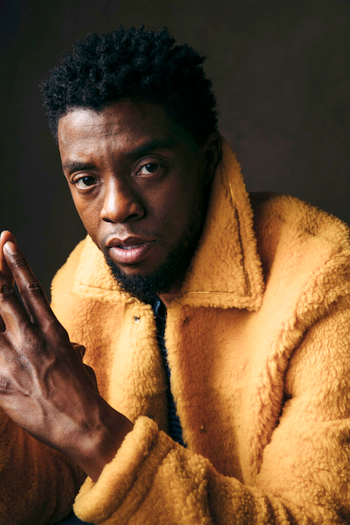 God damn, another incredible bummer. An incomparable actor who only a few years ago exploded into a pop culture phenomenon… it never would’ve occurred to me that he wouldn’t get a chance to cash in on it. He apparently had an idea, though, quietly fighting cancer for four years, filming movies in between chemo and surgeries.

Of course most know him as King T’Challa, an iconic role in a groundbreaking film that will now take on a different resonance. I was so excited when he got that role because I had seen him in GET ON UP – a movie that I was convinced could not work. And somehow it did. And this actor who I’d never paid attention to before, never heard much about, who was not even a dancer, and had a body type completely unlike that bizarre alien of a man that was the Godfather of Soul… somehow he turned himself into JB in so many ways. The look, the voice, the swagger, the performances, playing him young and old, charismatic and terrifying. Just an astonishing performance.

One thing I appreciated about his performance as Black Panther is that he took it so seriously he invented the Wakandan accent, studying what an African accent could sound like without colonial influence. (The studio had just wanted him to do English.) In interviews he seemed incredibly thoughtful and thorough, and it showed through in his movies.

Obviously I thought we would get more of him as T’Challa, but also I was looking forward to more of him with his own accent. The real Chadwick Boseman seemed to be the most compelling one, and I wish we’d gotten to see more of him. But I’m thankful for what we got.

Chadwick Boseman
This entry was posted on Friday, August 28th, 2020 at 9:38 pm and is filed under Blog Post (short for weblog). You can follow any responses to this entry through the RSS 2.0 feed. You can skip to the end and leave a response. Pinging is currently not allowed.