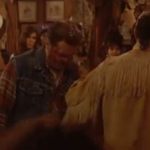 Hello friends, I need to talk to you about something. Probly not a big deal to most of you, but it is to me. A major, scary step in my life’s journey or whatever. What does it take to change the essence of a man time I need time time I do too I do too.

The occasion for this thorough soul and/or bellybutton search: after a decade and a half of secrecy I’ve decided to show my face in public, at least one time, at this Cinefamily Steven Seagal marathon I’m co-hosting with Jeremy Smith on June 14th. A one night event so promising I am risking my very Vern-ness to take part. Tickets still available.

As you know, I’m kind of a recluse, and have remained mysterious and anonymous and shit since starting my sight in 1999. This hasn’t helped me career-wise. I’ve turned down many fun opportunities: podcasts, signings, being a talking head on an A&E Biography of Steven Seagal, being seriously injured in the ring by “Demon” Dave DeFalco. And I’ve had trouble filling out forms that require last names.

I don’t regret most of it. I think there’s an artistic pay off to being an enigma and shit. I like that nobody knows for sure what I look or sound like, how old I am, what I do besides watch movies and occasionally flip off Dick Cheney in his limo. I love hearing that certain cinephile types are impressed that one of my buddies knows me, or seeing the reaction a co-worker  had when she found out I wrote the Steven Seagal book she bought her boyfriend. A couple times I’ve even had people talking to me about my reviews or about Seagalogy, not knowing that I wrote them. I get to be the poor man’s Bruce Wayne. It’s fun.

The thing I do regret is not meeting people. A bunch of you have written to me when visiting Seattle, wanting to hang out. I never do it because, I rationalize, you’re gonna be disappointed to put a face and voice to the words. Like Kiss without the makeup, or the man behind the curtain. What if you see me and it ruins the image you had in your mind? It’s like how the Calvin and Hobbes guy doesn’t want a cartoon ’cause you’d hear the actors and then what would happen to the voices you always had in your head when you read it? Years ago one of the newsies told me I was wise to hide my face because people pictured me as their father who they grew up watching action movies with. That’s sweet. I like that.

But shit, that’s out the door for anyone who goes to this Cinefamily thing, so I think the time is right to air some things I’ve been carrying around for too long. SPOILERS FOR VERN. I’m gonna come somewhat cleanish here, fellas. I’m gonna imply things that I’ve intentionally never said in my 16 years of movie reviewing. Things you probly figured out, but maybe didn’t want to know for sure. So if the mystery is important to you you might want to stop reading. This will be the definitive vague explanation.

IT IS POSSIBLE, hypothetically, that I’m not quite the grizzled old badass I sometimes pretend to be. And that some of the things I used to write about when I started out were not exactly what you would call “reality based.” In my opinion they are true, but the facts may often disagree. I would prefer you take them like I take Seagal’s hints that he used to work for the CIA. Sounds like bullshit, but… maybe?

If you’ve read me since the beginning you’ve seen me get more experienced as a writer and as a person, and I hope get better at both. I quickly started taking it more seriously and more personally. At the very beginning, I have to admit, it was more fuckin around than it was sincere. I thought it was funny to be disruptive. I wasn’t taking a standard “troll” route, but I definitely was trying to be a bull in the china shop of online film discussion. I wanted to make people ask “What the fuck is this guy doing here?,” to be inappropriate but disarming enough that nice people would humor me and assholes would dismiss me for the wrong reasons. And that’s what happened.

I named my column VERN TELL’S IT LIKE IT IS after a phrase I remembered Jesse “The Body” Ventura saying all the time as a WWF commentator, and I thought it was ironic because I was so full of shit. I was fuckin around when I talked about things in my life, trying to sound ludicrous, but I was talking from my heart about movies. And then as George W. Bush happened, and 9-11, and Katrina, I felt the need to vent about those things, and we went through them together, for better or worse. I really went to those peace marches, obviously. I really flipped off Dick Cheney. I really stopped driving, that was all real. So how were you supposed to know which parts I was joking about?

Meanwhile I was finding my calling. I like to think I helped promote a more sincere appreciation and discussion of action movies, and that I both predicted and first identified a renaissance in DTV action. I believe I was ahead of the mainstream on issues of action clarity, among other things. Of course I’m sincere about all this.

But through a samurai code of artistic purity I’ve also tried to also stay true to the goals of the 16 years younger Vern who posted on Usenet with the email outlaw_69@my-deja.com (get it, 69) and made people uncomfortable by getting too personal about his sobriety and legal troubles while they were just trying to talk about the box office for MEN IN BLACK or some shit. I think people got a laugh from it at the time but years later I worried about how seriously people took that stuff. I didn’t want to be a liar and a traitor, sweating on Oprah’s couch like James Frey. For my peace of mind I stopped ever making reference to my past and took my origin story off the outlawvern.com banner. I never made any false claims in my interviews I don’t think.

But is that enough? Like Seagal I never denied it. Even professional wrestling decided to let their guard down and become sports entertainment, but I stuck stubbornly with the ol’ kayfabe. And until I said yes to this thing a month and a half ago I thought I would take it to my grave.

I want to be a mysterious figure, but I don’t want to get credit for doing shit I didn’t really do, overcoming adversity or bettering myself any more than the next guy. It doesn’t happen very often, but I feel like such an asshole when someone reaches out to me for advice on shit besides movies or self-publishing, important things they think I know about because I used to say I did.

I never meant to make light of these issues, but I can’t pretend to be totally innocent. It was a point of pride to me that nobody thought Moriarty really had a secret lab or Harry really had all these elaborate cloak and dagger procedures he talked about, but some people took everything I said at face value (and hammered me for it in the talkbacks). That was all in fun, but if you’ve been believing my tall tales for this long it’s kind of a hard pill to swallow if I say “hey man, I was just jokin around.”

So, my sincere apologies if I’ve unfairly misled any of you, or also if I’ve ruined the fun by bringing up this shit at all. I’m not planning to reveal any more or talk about this again, but I made this bed a decade and a half ago and maybe it’s time to get in and get comfy.

If hypothetically you go to this thing and see me or meet me and I’m not what you expected, and you end up still liking me… do me a favor and tell everybody I looked like kind of an interesting combo of Steve McQueen, Kris Kristofferson and Lee Marvin. Or impossible to describe, like some H.P. Lovecraft creation. Not that those things aren’t true. They probly are.

Anyway I hope you understand what I’m talking about here. And if you get to go to the thing please introduce yourself. Since I finally crawled out of my cave I hope I finally get to meet everybody.

And as long as I’m coming clean about things I should also apologize for the time I submitted a fake review to The Ain’t It Cool News of a movie I hadn’t even seen yet. See if you can guess which one is me. It might be the best thing I’ll ever write but I am sorry.

Vern
more of a metaphorical outlaw, in some ways

This entry was posted on Tuesday, June 3rd, 2014 at 1:09 pm and is filed under Vern Tells It Like It Is. You can follow any responses to this entry through the RSS 2.0 feed. You can skip to the end and leave a response. Pinging is currently not allowed.

152 Responses to “Vern Tell’s It Like It Is: The Confession”