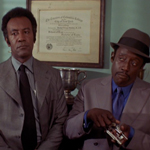 COTTON COMES TO HARLEM is a quirky, colorful love letter to the people and culture of Harlem, tucked away inside a crime story adapted from a Chester Himes novel. MGM packaged the DVD in the “Soul Cinema” series along with COFFY, FOXY BROWN, BLACK CAESAR and TRUCK TURNER, but to me it doesn’t really feel like a blaxploitation movie. If it is it deserves credit for being one of the most textured and gorgeous looking blaxploitation movies. I will intersperse some random screen grabs throughout this review to give you an idea of all the great colors, clothing, sets and locations.

Under the opening credits the fly-dressing Reverend Deke O’Malley (Calvin Lockhart, PREDATOR 2) rides into town in a Rolls Royce, given a Beatlemania style welcome, steps onto a stage draped in a glittery cape that a guy pulls off of him like he’s the Godfather of Soul. The whole block is packed with crowds excited to hear his righteous words of black pride and to put down their payments to emigrate to Africa with him. Suddenly a squad of masked gunmen pop out of the back of a soul food truck, shoot up the place and take off with the money. “87 grand of poor black people’s cash.” 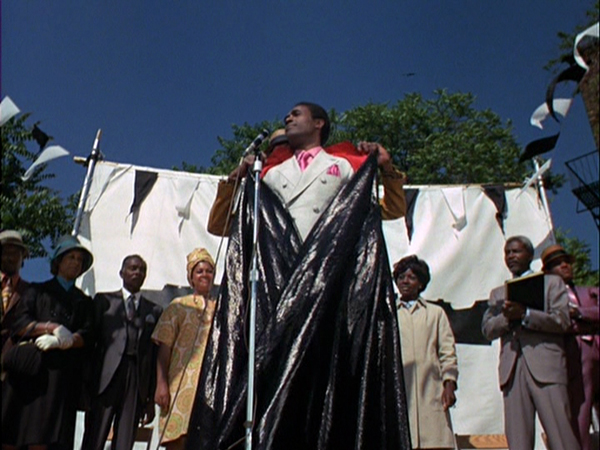 Detectives Gravedigger Jones (Godfrey Cambridge) and Coffin Ed Johnson (Raymond St. Jacques) give chase, but the thieves get away in a gold van. So who took the money and where is it? Digger and Coffin believe O’Malley is a scam artist, and sure enough he goes into hiding, taking advantage of poor Mabel (Emily Yancy), one of his followers who’s widowed in the shooting but remains lustily dedicated to the reverend. It might be my imagination but it seems like she’s interested in him in more than an “I like your speeches so I’m gonna emigrate to Africa” type of way. Or it’s also possible that funeral dresses were just less conservative back then. 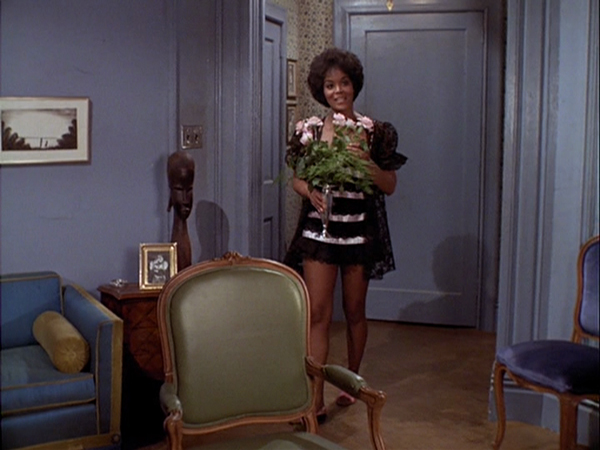 The detectives interview O’Malley’s usual girlfriend, a dancer named Iris (Judy Pace, later in BRIAN’S SONG and FROGS). She’s not to be messed with, and everybody knows it, but when the white cop has to watch her for a while he can’t help but succumb to her powers (“You gonna take a shower with me, white boy?”) and winds up in the hallway wearing only socks on his feet and a paper bag on his head, with like 8 or 9 neighbors pointing and laughing at him. (Why did they all come out into the hall at the same time? This guy has terrible luck.) 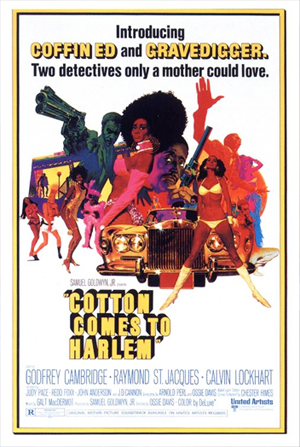 Also mixed up in the mystery is Uncle Budd, an old junk dealer played by the popular standup comedian Redd Foxx in his first credited movie role, two years before he played an old junk dealer on Sanford & Son. He plays a likable goof, doesn’t get to riff or be dirty or insult people like you’d expect, but does provide a great punchline to the whole movie.

I always heard this title and I thought Cotton was a person, like Mr. Smith, Mr. Deeds or Debbie. It turns out it’s literally a bail of cotton, the perfect thing to have as the mcmuffin in this story. Everybody’s trying to find it. Uncle Budd finds it at the beginning and tries to sell it. Scraps of it are a major clue at a crime scene. At one point someone brings O’Malley a sample, and he smells it, like tasting a sample of coke. Of course given the history of the cotton industry in the United States this is loaded with meaning. Ultimately this is a story of black independence, trying to own the businesses in Harlem. Nobody wants to stay out in the fields.

It’s a movie that enjoys playing with stereotypes. There’s a good laugh where a white villain is snooping around Uncle Budd and his friend scares him away saying “Look, white man. Ain’t you a long way from where you live?”

Afterwards the friend nudges Uncle Budd and asks “Was that black enough for ya?” with a big smile on his face. This is O’Malley’s catch phrase, a line in the theme song and a theme throughout the movie. 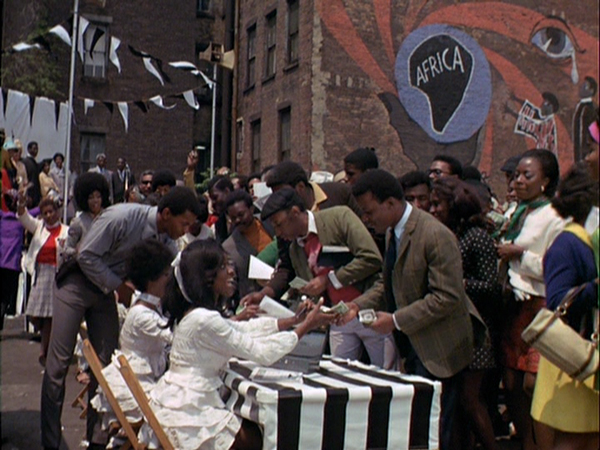 The climax takes place at a burlesque musical coincidentally also called Cotton Comes To Harlem. Iris is on a set of a plantation, dressed in rags and a wig that she ends up stripping off as she sings about “Cotton came to Harlem, and Harlem kicked its ass.” A white villain has to sneak on stage so, to not arouse suspicion, he puts on a top hat and blackface! When he’s unmasked (it clearly starts as makeup but somehow becomes a mask that can be pulled off) and pointed out to everyone I thought it might be a reference to THE JAZZ SINGER. I don’t know, I’ve never seen either version, but maybe the Al Jolson one has a scene like this one a buddy of mine always raves about from the remake:

Or maybe not, but it’s important that we all watch that scene and enjoy Ernie Hudson’s performance.

Even Coffin and Digger are subjected to the indignity of stereotypes when the car chase ends with their car not just crashed into the traditional fruit stand or truck, but specifically a shipment of only watermelons. They respond with the same droll expressions they use in pretty much every other situation. Ed pushes one of the melons off in frustration but they just shake their heads and drive away without comment.

Coffin and Digger are in multiple Chester Himes stories and two other movies, the sequel COME HOME CHARLSTON BLUE and much later A RAGE IN HARLEM, which are instantly added to my list. Even if the world of this story weren’t so full of detail and interesting neighborhood factions (the churchgoing protesters, the militants who stand watch in their uniforms, the karate-trained/Swahili-speaking revolutionaries, the junkies and pickpockets, the white mafioso, the white rednecks that show up at the protest for some reason [they want everybody to go back to Africa?]), and even if it wasn’t so full of beautiful women, colorful clothes, plushly decorated apartments and period Harlem locations, the movie would still be worth my time just for Coffin and Digger. You just want to keep watching these two cool cucumbers who know the neighborhood and the people and how to navigate through the system and even get one over on the white people on the force. 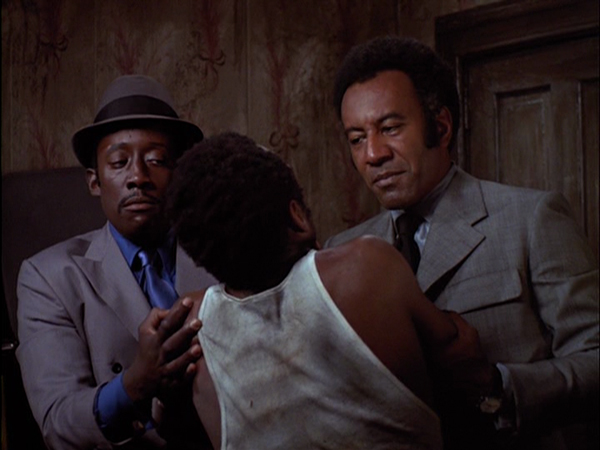 The way they fuck with their white colleague at the end is classic. They’re the type of people who are always ahead of everyone else, but then they won’t brag about it. They’ll just wait for the others to figure out what they did and then they just stand there and look nonchalant. Digger has those heavy eyelids and a trace of a smile and you just fuckin know he knows something you don’t.

When a crowd is ready to riot outside of headquarters, all because Coffin and Ed insisted on keeping the reverend on a technicality for 24 hours as part of their plan, they stand up in front and promise to get the money back. Ed explains why you can believe that: “We may’ve broken some heads, but we never broke no promises.” And the crowd doesn’t argue with that. They know they can’t deny it.

It’s also kind of a comedy. There are alot of little gags that are CANNONBALL RUN broad, not really my favorite. But the dialogue is genuinely witty. Like the part where Coffin Ed is trying to disperse a drunk from the protest and the guy says “Ain’t this the goin back to Africa rally?”

Or after Ed has compared their situation to one of the stories about Brer Rabbit and Brer Fox (“god damned colored fairy tales” Digger calls them) and then Ed tells him to “Stay put until you see the white of the rabbit’s ass.”

Maybe the strangest bit of comedy is when Coffin and Digger defend themselves from the militants by grabbing one of them and tossing him straight up in the air. The other guys have to catch him. Later, during the big Free O’Malley protest they start throwing chickens into the crowd for some reason. So there’s kind of a throwing motif. 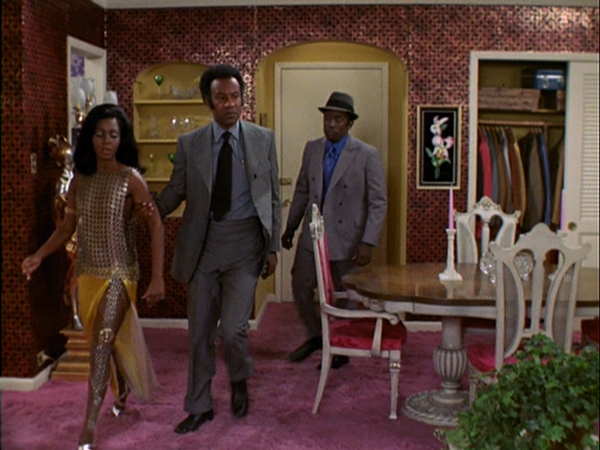 I’m not saying this is a positive or a negative, but it’s kinda surprising how much the women get knocked around in this, in one case by a good guy. Iris tosses a drink in Ed’s face, so he grabs her by the hair and throws her against the wall. Later Iris conks Mabel on the head with a 2 x 4 and O’Malley punches her in the face. (He’ll live to regret it.)

Although he’s not in the movie, this was directed by the great actor Ossie Davis. He’d been acting in movies and TV for 20 years at that point and written plays, but this was his first time as a director. He wrote the script with Arnold Perl, writer of JAZZ ON A SUMMER’S DAY, the play that FIDDLER ON THE ROOF was based on, and a 1972 documentary about Malcolm X.

Davis was a very political guy, remember he knew Malcolm X and famously delivered his eulogy. So he makes it clear in the movie that O’Malley being a phony doesn’t mean other leaders like him are too. After an interrogation Digger takes a moment to dress him down. “You coulda been another Marcus Garvey or even another Malcolm X. But instead you ain’t nothin but a pimp with a chicken shit backbone.” 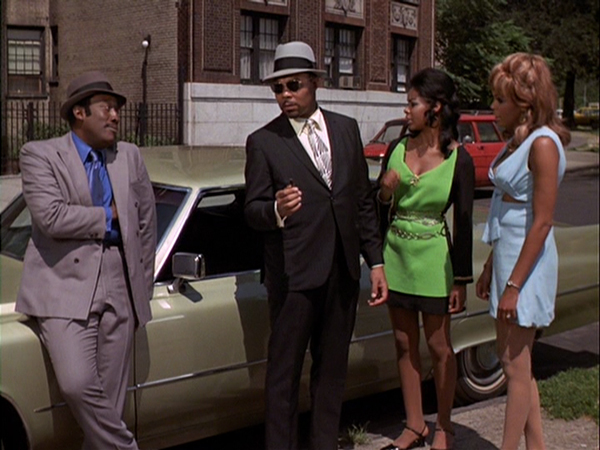 Even though it’s a black director, based on a book by a black writer, and about black characters, they actually got a white dude from Canada, Galt MacDermot, to provide the funky soundtrack. MacDermot is best known for doing the soundtrack to HAIR, but this is his first movie score. His music has been sampled by The Pharcyde, Madlib, J Dilla, Run DMC, Naughty By Nature, Special Ed, Handsome Boy Modeling School and many others. His greatest contribution to sampling is a song called “Space” from his score to WOMAN IS SWEETER, a documentary about Yves St. Laurent that came out in 1973 (though he released the soundtrack album on his label Kilmarnock in 1969). See if you recognize this one:

Yeah, that’s right, a huge chunk of that is used undisguised in a hip hop classic:

Anyway, he’s good, and he does a good job here.

What I’m getting at is COTTON COMES TO HARLEM is a really good and unique movie. If you’ve been putting off watching it forever like I was I’m hear to tell you to stop fuckin around. It’s time.

Calvin Lockhart Chester Himes Cleavon Little Emily Yancy Galt MacDermot Godfrey Cambridge Judy Pace Ossie Davis Raymond St. Jacques Redd Foxx
This entry was posted on Thursday, February 20th, 2014 at 1:58 am and is filed under Crime, Reviews. You can follow any responses to this entry through the RSS 2.0 feed. You can skip to the end and leave a response. Pinging is currently not allowed.

9 Responses to “Cotton Comes to Harlem”