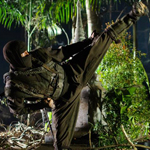 As NINJA: SHADOW OF A TEAR is premiering in Austin, let’s continue with david j. moore’s series of interviews. Today he talks to producer Frank DeMartini, a guy who insisted they stop fucking around and just make a sequel to NINJA already. In other words, an American hero. You’ll also find out why he feels qualified to compare the NINJA series to the AMERICAN NINJA one.

The producer’s chair on the set of Ninja: Shadow of a Tear is filled by Millennium Entertainment’s own Frank DeMartini, who was once a Hollywood attorney before he became a producer. DeMartini is there on the set every moment, supervising every detail of the production, and he allows me to be comfortable on the set, which is sometimes difficult to do on a movie production where grips, make-up, wardrobe people, and props and wires of all sorts can create a hectic atmosphere. DeMartini is calm, and his mandate on this set is to help director Isaac Florentine and star Scott Adkins create the best action film possible. When he has time, he submits to my questions and I’m surprised that he is able to converse on action movie terms. Off the record, we talk about the action movie stars from the glory days of Nu-Image, stars like David Bradley, Frank Zagarino, and Bryan Genesse, and when we actually sit down to conduct the interview, it’s clear that he has an interest in these types of films, and indeed would love to produce more of them.

Tell me how you got the ball rolling on Ninja 2.

What happened was that after Ninja 1, there was always the intention to make Ninja 2. The time had passed, and it was getting to the point where it was basically dead. A first draft script had already been written, and I was talking to Avi [Lerner], and he said that we should go back to Thailand to make another movie, and I said, “What do you have in mind?” He said there were a few films we could do, and I said, “Well, what about Ninja 2?” He said, “Let’s look at it and see how much it would cost, and maybe we’ll make it there.” I started getting involved and started pushing it. When you’re a producer, you need to push a project into existence, and if it weren’t for me and my pushing it, it would have died. 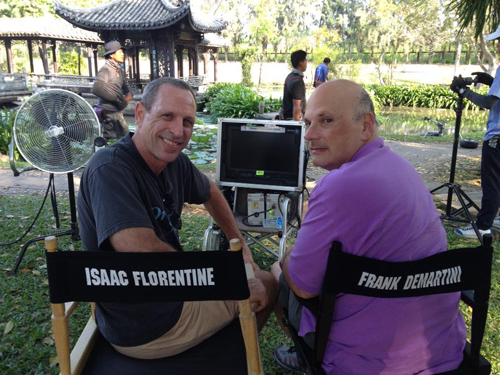 Talk about working with Isaac Florentine on this film.

I’ve known Isaac for probably 15 years. Even more. At one point, I was his attorney before I was producing. Even though we’ve known each other, we’ve never had the opportunity to work together until now. This came together, and we finally got to do what we’ve wanted to do for a long time. There were a number of projects that we were trying to put together with bigger budgets, but none of them came together.

Were you a fan of the first Ninja film with Scott Adkins?

My deal with Millennium is that I have a first-look deal there. When they pass on my projects I can shop them elsewhere. I had seen the first Ninja movie, and yes, I did like it. I’ve always been a fan of Scott’s and I wanted to do a movie with him. Everything came together at the right time.

What is it about these Ninja movies that appeals to you?

I’ve liked the genre since the Bruce Lee days. Sam Firstenberg [director of Revenge of the Ninja and American Ninja] was also one of my clients when I was a lawyer, and I was involved with making movies even then when he was making movies with Sho [Kosugi]. It’s something I like. I like the aura of the Japanese culture. 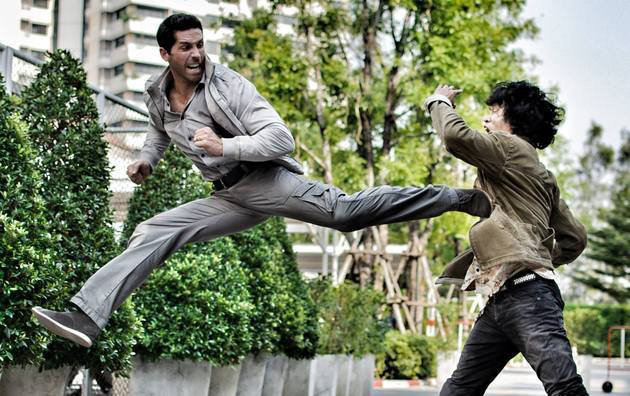 If you can hear the buzz of the action world, you’d hear people talking about Scott Adkins. What do you think of Scott?

He’s a real martial artist. Back in the day when we were doing American Ninja, you knew Michael Dudikoff couldn’t do anything other than do the stuff on screen. Michael wasn’t a martial artist. Scott is for real. He can do this stuff in reality, as opposed to the actors who can’t. He’s very talented. He can also act, so that’s a big advantage over a lot of these guys.

What is the plan for Ninja 2 in terms of making it different from the first one and making it original?

The first movie was more of an anime, cartoon version of a ninja movie. The set designs displayed it, the script displayed it. What we’re trying to do this time is make a realistic, hardcore action movie about revenge, albeit we are tied down to the requirement of a PG-13 rating, which kind of hurts us a little bit, but we’re trying to work around it.

Whose decision was it to make it a PG-13?

What can fans of martial arts films, fans of Isaac’s and Scott’s expect from Ninja 2?

I think they’re going to get a good ride because our fight choreographer, Tim Man, is really, really good, and these fights will be very gritty and stylistic in a way that hasn’t been seen a lot recently in the martial arts world. For one example, everything is being done practically – there will be very little CGI. At this point, there is one wire stunt in the movie, but everything else is being done live. It’s all being done for real. It’s being done in the vein of a 1970’s or 1980’s action movie. Hopefully we can elevate beyond the first one so that we can make a third one shortly thereafter.

Say something about working in Thailand.

I love working in Thailand. It’s a fun experience all the time. 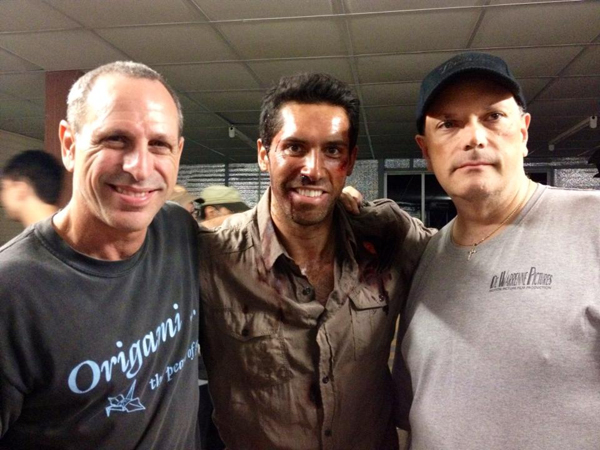 Note from Vern: Huh, can’t say I understand going for a PG-13 rating on what I assume is a DTV movie, but honestly I don’t remember if there was any blood in the first one or not. I’m not gonna worry about it too much.

Other reviews in this series so far:

david j. moore
This entry was posted on Friday, September 20th, 2013 at 6:28 pm and is filed under Blog Post (short for weblog). You can follow any responses to this entry through the RSS 2.0 feed. You can skip to the end and leave a response. Pinging is currently not allowed.

9 Responses to “Interview with Frank DeMartini by david j. moore”