The Super-Kumite: Round 1, Bout 4 results

Here we have a hell of a matchup: two movies with serious b-movie credentials. Jalal Merhi vs. Don “The Dragon” Wilson, Canada’s Film One Productions vs. Roger Corman’s Concorde, late ’80s-barely-theatrical vs. mid-’90s-DTV, fist vs. talon. And both of them have Billy Blanks in the cast.

In the battle of the Blankses, BLOODFIST is victorious. The story is better constructed, finding plenty of non-athletic pursuits while still respecting its tournament. The ratio of legitimately-badass to unintentionally-funny is a little higher. The hero is more likable. I like that it uses the tournament movie formula effectively but also throws in an innovative twist or two (the traitorous mentor comes to mind). TALONS OF THE EAGLE only uses the tournament as a setup for a buddy cop/undercover story, and those cliches are not as re-usable, in my opinion. Not as mythic.

So the Red Fist Club will continue into round 2. But this was competitive. Don’t let the loss deter you from watching TALONS OF THE EAGLE, an unusual combination of usual ingredients.

Now that I’ve completed Round 1 of the Super-Kumite I’m going to take a break to catch up on review of other non-fighting tournament movies I’ve been watching lately. During this time you guys can help me out if you’ve seen any of these movies slotted for rounds 2 or 3. I think I fucked up and scheduled more non-tournament movies, for example after more reading it seems that BLOODFIST II ditches the Ta-Chang tournament for non-tournament matches. Am I right about that? Does BLOODFIST 2050 (or any of the others) have an actual tournament? Or do I need to substitute screenwriter Robert King’s other takes on the same idea, FULL CONTACT (1993) and DRAGON FIRE? But does DRAGON FIRE even have a tournament? And what about those Bolo movies, did somebody say those were gonna get disqualified?

I’m gonna hold off on the official brackets until I have this settled, but here are the remaining teams: 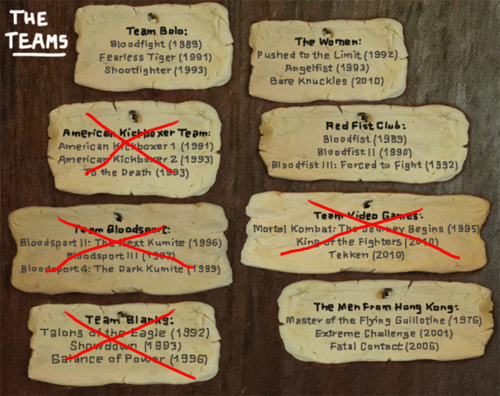 This entry was posted on Tuesday, June 18th, 2013 at 12:06 am and is filed under Uncategorized. You can follow any responses to this entry through the RSS 2.0 feed. You can skip to the end and leave a response. Pinging is currently not allowed.

9 Responses to “The Super-Kumite: Round 1, Bout 4 results”