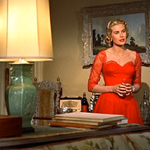 Tony breaks the news to the poor guy slowly and suspensefully, inviting him over supposedly to talk about buying a car from him, acting out a whole “you look familiar, do I know you from somewhere?” routine, and slowly revealing the backstory and the plan through conversation that at first seems friendly and by the end seems like a hostage situation. It’s a type of verbally-based thrill we don’t usually see these days outside of Tarantino movies.

It’s all so simple, both in story and in visuals, so that makes it really cool when Hitchcock suddenly goes real fancy-pants on the big murder sequence, in a way that justifies the title. There’s a giant, screen-filling closeup of a finger dialing a rotary phone, but I’m pretty sure it was done with oversized props. And then a shot of the machinery moving inside the phone as it dials. It brings to mind many other visual flourishes over the years: the x-rays of bones breaking in THE STREET FIGHTER, Fincher’s digital camera moves through walls in FIGHT CLUB and PANIC ROOM, the technical-Oscar-winning camera moves through engines and car interiors in THE FAST AND THE FURIOUS, everything that is constantly happening in the CRANK movies all the time. Hitchcock made it powerful by using it for a crucial, nail-biting moment in the middle of an otherwise visually sedate movie. 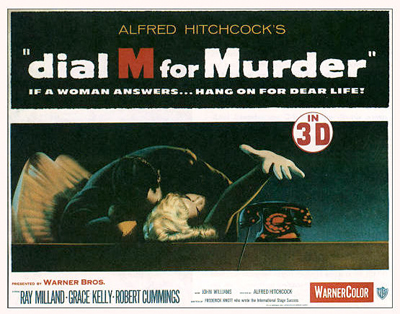 The murder scheme involves Tony bringing Mark to “a stag party” (sounds more exciting than it looks when they show it), a hidden key to the front door, a phone call and a fake robbery. This will come as a surprise to everybody, but things don’t go as planned, and the second half of the movie is Tony having to think fast on his feet to come up with explanations for everything that will keep him from being found out and maybe even steer things to his advantage in other ways (if you can’t murder ’em, put a murder rap on ’em). Meanwhile, a police investigator (John Williams – not the STAR WARS music guy, but an actor who was in 10 episodes of Alfred Hitchcock Presents) interviews him, figuring out more than he’s letting on as they converse. A blabbermouth chess match.

I don’t know why I’m dodging spoilers here – this has been out for a while. I feel like you’ve had a chance to see it by now. So let me tell you my two favorite end spoilers:

1. In the beginning Mark, who’se a crime writer, says that if he tried to murder someone in real life he knows he would make some dumb mistake that he’d never realize until everyone was standing around looking at him. So of course it’s very satisfying at the end of the movie when Tony is realizing his dumb mistake as he’s standing there with everyone looking at him.

2. When Tony realizes he’s lost you’d like to see a weaselly expression on him, like he’s been DEPARTED, or for him to keep lying or desperately make up excuses or make a scramble to a window or something. Instead he does something much more sportsmanlike: he laughs, admit he’s caught, and pours everybody drinks.

It’s cool how there’s not really a good guy in this movie other than the police inspector, who comes in kinda late. Margot is the victim, but she was cheating on her husband, that’s not too cool. Mark seems like a nice guy (and I’m sure his books are okay) but he’s a lying cheater too. I know he’s never gonna score anybody like Grace Kelly legitimately, but them’s the breaks, jack. Still should’ve kept your dick in your pants. And Swann seems like a victim too, I felt sorry for him getting set up for that, but then he really broke in and tried to strangle her to death. So that makes him less sympathetic, for me anyway. Your mileage may vary, if you are a strangler or are pro-strangling or something.

And the main character really is Tony, who was legitimately wronged but also is doing the biggest asshole maneuver in the whole thing. What he shoulda done is punched Mark in the balls and ditched Margot and went on with his life. I know that he even more than Mark is never gonna land another Grace Kelly, but better to have loved and lost then to have murdered, I always say. You’re going about this the wrong way, pal.

I’ve seen this movie before and liked it but I watched it again for a very important reason: the SIFF Uptown Theater here in Seattle played it in 3D last weekend. I always knew it was shot in 3D but never thought I’d get a chance to see it that way until they released it as a 3D blu-ray. When that happened I thought maybe some day I could see it at a buddy’s house or something. But there it was, playing in an actual theater!

It was shot with the same rig as the original HOUSE OF WAX, which I saw and enjoyed in 3D a long time ago. That was a polarized 3D similar to what they use now, lightly tinted glasses of the same color on both sides, not the shitty blue and red kind. From what I’ve read I believe they actually had to project two synchronized prints at the same time to make it work. Now they’ve transferred it to modern 4K digital projection. The Uptown uses Dolby 3D, with the heavier re-usable glasses, but I think this could be shown in Real D also (anybody know for sure?). It took a second for my eyes to adjust, because the transfer is not as crisp and clear as what we’re used to seeing in digital projection, but then the depth was there and it stuck around. It looked good.

Shooting such a simple adapted-from-a-play movie in three dimensions might seem like an odd choice, but Hitchcock knew what he was doing. I love the way he composes the shots for 3D. There’s almost always a lamp or a row of bottles or something in the foreground, with the characters in the middle and a wall or various furniture in the background. There’s always multiple layers of depth. I wish they would show this movie to some of today’s 3D directors who spend a surprising amount of time just shooting characters standing talking with only a wall behind them.

As you know I strongly disagree with the conventional wisdom that it’s bad to have things flying out of the screen. I’m all for it and I think that’s another thing that modern 3D almost always gets wrong. But DIAL M FOR MURDER can keep both viewpoints happy because Hitchcock only does I believe two show-offy comin at ya shots, but they’re very well chosen. One is a hand holding out the key that is so important to the planning and undoing of the murder plot. The other is the famous shot of Margot reaching her hand out as she’s being strangled, before she finds the scissors. It’s always been a great shot in a classic suspense sequence, but when it’s reaching out at you it’s way better. It’s the exclamation point on the sentence. (A well earned exclamation point, not a gratuitous Ain’t It Cool headline type exclamation point.)

I like this movie alot, and it’s even better in 3D. And it makes me happy just to know that it can happen. This is the type of thing I’ve been hoping for ever since they started doing the digital projection 3D. If they’re gonna try to ruin everything by getting rid of film they should take advantage of the technology in ways other than just saving on shipping charges, and to be able to resurrect movies like this is one such advantage.

Of course, this theater is run by SIFF, which is the Seattle International Film Festival, and not all cities have theaters as dedicated to revival screenings. But this technology does make it more feasible to get this kind of thing going, and I’ve read that the softcore sex comedy THE STEWARDESSES has been re-released this way, and that Drafthouse Films is doing COMIN’ AT YA! I hope other old school 3D movies like HOUSE OF WAX, THE MAD MAGICIAN, IT CAME FROM OUTER SPACE, REVENGE OF THE CREATURE, FRIDAY THE 13TH 3D, AMITYVILLE 3-D and JAWS 3D will be converted. Or maybe even more interesting, some of the ones that you wouldn’t think would’ve been shot in 3D: KISS ME KATE, HONDO, DANGEROUS MISSION, and they could show the 3D Casper and Popeye shorts before some of these. Oh, and CAPTAIN EO and WINGS OF COURAGE and I’m pretty sure some Japanese theme park had a 3D Godzilla movie.

Let’s get this going, people. But if not I already bought STEP UP 3 on 3D blu-ray and I intend to find somebody’s 3D TV to watch it on. I will not be stopped.

In conclusion, I highly recommend DIAL M FOR MURDER and highliest recommend it if you can see it in 3D. Good one, Hitchcock.

3D Alfred Hitchcock Anthony Dawson Grace Kelly Ray Milland Robert Cummings
This entry was posted on Wednesday, March 13th, 2013 at 12:20 pm and is filed under Reviews, Thriller. You can follow any responses to this entry through the RSS 2.0 feed. You can skip to the end and leave a response. Pinging is currently not allowed.