Yes, at least one did, and it is PAST MIDNIGHT, Tarantino’s first film credit besides production assistant on Dolph Lundgren’s MAXIMUM POTENTIAL workout video. Associate producer Catalaine Knell thought his contributions to the script were important enough that she shared her credit with him.

Richardson plays Laura Mathews, a social worker in Snohomish, Washington (for real! not Canada!). She gets assigned the case of Ben Jordan (Rutger Hauer), who has just been released after a 15 year bid. He’s notorious in the area because he was convicted of murdering his pregnant wife. You know how gossipy people can be in these small towns, they won’t let something like that go. (It is kinda weird that he only got 15 for that.)

Jordan doesn’t want to talk about it. He never confessed, but seems to enjoy using his reputation to creep Laura out. You know how people who get framed for murder are, they like to make you think they’re gonna kill you, ha ha. She, in what in my opinion constitutes poor judgment, is immediately attracted to him and starts going around talking to people related to the case to try to prove his innocence. He repeatedly warns her not to and sort of threatens her, and anyway he already did his time, so what’s the point? I think she’s just trying to prove it to herself so she can date him. 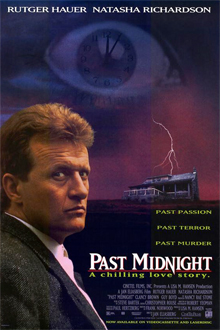 Brown plays her co-worker who openly has a thing for her and (for good reason) doesn’t think she should date the convicted pregnant-wife-killer. He doesn’t even bring up that it’s unethical and should get her fired. He also wears an orange shirt and tacky tie, possibly to make him the Clarence Worley nerd surrogate character, I’m not sure. He’s very loyal so he spends alot of time fishing outside her house and keeping an eye on her. In a Secret Service way, not a peeping tom way.

Speaking of PEEPING TOM, Jordan (or the real killer, or whatever) filmed the crime on black and white super-8 film. You just see his POV and his hands. I don’t know if he built a head attachment or what. He definitely has a process figured out because when he starts coming after Laura he leaves her a film of her own bathroom with a severed arm in it, leading her to find the severed arm in her bathroom. He cut off somebody’s arm, filmed it and developed it before she got home! This guy knows what he’s doing.

Paul Giamatti has a small role as Larry, a possible witness to the murder who’s also the mildly retarded brother of Jordan’s old buddy (Guy Boyd). He’s so young I didn’t even recognize him at first. Like Tarantino this is pretty much Giamatti’s first film credit (the only thing earlier was “Heckler #2” in the TV movie SHE’LL TAKE ROMANCE starring Linda Evans.)

I think the best scene in the movie is when she goes to talk to the dead wife’s dad. Something weird is going on there – he has pictures of her all over that make it look more like his girlfriend than his daughter. But you kind of side with him anyway because it’s so inappropriate for the social worker of the murderer to come ask him questions. When he figures out who she is and tells her to get the hell out it’s kinda scary because you’re attached to this protagonist who’s in the wrong. You’re like “Come on lady, let’s get the fuck out of here!” The dad is played by Ted D’Arms, a character actor you probly don’t know unless you remember the neighbor in DRUGSTORE COWBOY who goes after the cops with a shotgun because Matt Dillon convinces him they’re peeping toms. D’Arms passed away at the end of last year. I just remember him because he lived in Seattle and I saw him around sometimes, he seemed like a nice guy.

Richardson is good in this, her eyes can’t hide her attraction to Jordan, which she pathetically tries to pass off as professional interest.  But there’s something off about the chemistry there. I mean, Rutger Hauer is awesome, we all know that, but I couldn’t buy her having an instant animal attraction the moment she saw him across the room. You could argue she wants to hump him so bad because she’s attracted to the danger of a guy who the only thing she knows about him is that he savagely stabbed his pregnant wife in the belly. But then why is she trying to prove that he didn’t do that? Plus, he’s always wearing a suit and stuff, seems more like a college professor than some rugged beast whose manly musk reignites her cavewoman instincts.

And then there’s the description of the life Jordan and his wife had before she was murdered: “a perfect picture of American white trash marital bliss.” There’s nothing about Hauer or Dana Eskelson, who plays his wife in the super-8 footage, or their home or anything, that seems at all “white trash.” I picture Tarantino in his late 20s rewriting these things, trying to slip a bit of himself into some movie that’s gonna end up buried on late night cable. And maybe he gets into it and thinks he’s turning it into something good, and then he sees this and thinks “Shit, that wasn’t what I meant.”

There are definitely some parts that we can safely assume he added. Laura cherishes an old David Goodis novel that belonged to her dad. When she first meets Jordan he asks her about reading and she says “I like the Travis McGee novels.” He recommends The Burglar by David Goodis (she doesn’t acknowledge her familiarity with Goodis, maybe to show us that she’s guarded.)

There aren’t any of the TV and movie references that were such a trademark of his early dialogue writing, unless you count the line “Way I understand it [the super-8 snuff film] makes NIGHTMARE ON ELM STREET look like CHARLOTTE’S WEB.” But those are very basic movie titles, anybody coulda come up with that.

That one is said by Tom Wright (Charles from MARKED FOR DEATH), who also gets to use a favorite Tarantino term: 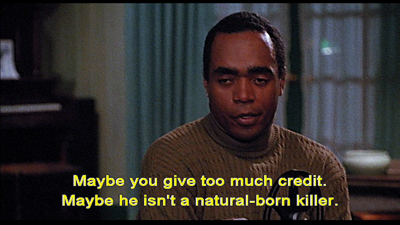 The super-8 movie shows the wife smoking and drinking, wearing huge (for the time) sunglasses, eating a burger. I bet he had like 3 paragraphs describing the burger. In retrospect this might’ve been his first failed attempt to put an Alabama or a Mallory type on film. Also in the movie the person behind the camera sneaks up on her when she’s in bed and grabs her foot. This is another part Tarantino might’ve put into more detail in the script than what ended up on screen, in my opinion.

The cinematographer is Robert Yeoman, who does all of the Wes Anderson movies now. Screenwriter Frank Norwood wrote DRIVEN TO KILL, but not the Seagal one. Director Jan Eliasberg has mostly done TV before and after this, ranging from the Dirty Dancing TV series to Criminal Minds and NCIS: Los Angeles type of stuff. Yeah, that sounds about right. I cannot in good conscience recommend this mediocre thriller, but you know me, I found it interesting for educational purposes only.

Clancy Brown DTV Natasha Richardson Paul Giamatti Quentin Tarantino Robert Yeoman Rutger Hauer Ted D'Arms Tom Wright
This entry was posted on Thursday, August 23rd, 2012 at 3:40 pm and is filed under Reviews, Thriller. You can follow any responses to this entry through the RSS 2.0 feed. You can skip to the end and leave a response. Pinging is currently not allowed.

26 Responses to “Past Midnight”