It turns out that the eleven do NOT die horribly as I predicted. But their past (the other movie) does catch up with them, and the sequel is all about them doing various heists in order to pay back the money, plus interest, that they stole the first time around. So that means that Ocean’s 11 actually have a net loss across the two pictures. I mean, think about that. That’s terrible! What does that say about the current state of doing a job right? You want to do the impossible, so you bring in 11 of the greatest experts from around the world, you pull it off, you win back your ex-wife, and you have a fun time doing it. And your reward is horrendous debt and threat of life and limb. That’s how this world rewards you for ambition, talent and dedication.

That’s kind of a bummer in a caper movie where you expect each one to be a bigger and better heist. But it’s nice to be able to have another ending that’s not one of the standard caper movies endings (A: they get away with it and are last seen chilling on a beach somewhere; B: they almost get away but die tragically, probaly ironically.) At the very least this movie will probaly be a big inspiration to those of you with large credit card debts. 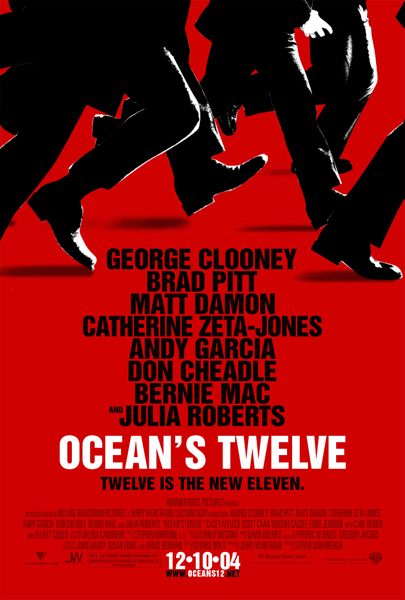 As you know from my original O11 review, I was already ready for a sequel. And I always pictured it as a tighter version of 011, maybe a little harder. As much as I enjoyed that movie it was no THE LIMEY or OUT OF SIGHT which are the movies that really told me this Steve Soderbergh was capable of a top notch crime picture. I thought they would follow the same basic formula of Part 11 but with the characters already introduced, they would be able to have a more detailed and realistic look at a heist, maybe some gritty everything-goes-sour type business, who knows. But with the same charismatic cast and bouncy sense of humor and funky David Holmes soundtrack.

The Part 12 they made is pretty different from the one I imagined. It actually doesn’t follow the formula of Part 11, except that it starts out by introducing the various players in different cities (this time rounded up by the angry Andy Garcia, not by George Clooney). After that it goes into a complicated plot with multiple heists to cover the debt to Andy Garcia, plus a competition with “The Night Fox,” the European Bruce Wayne of cat burglary, and trouble with Brad Pitt’s ex-girlfriend, interpol agent Catherine Zeta Jones (The Phantom).

After the first one, they seem confident that they can get away with more. So it gets pretty silly, with scenes that are almost like sketches. Like there’s a great scene where Matt Damon tries to sit in with the big boys Clooney and Pitt as they meet with investor Robbie Coltrane, but is confused as they talk in nothing but gibberish. A couple scenes like this and I started to think maybe this was gonna be like Ocean’s 11 meets Schizopolis, but then it calmed down a little (unfortunately). Still, it’s a sequel that takes itself even less seriously than the original. I mean I don’t think the audience I saw it with was ready for the scene where the Night Fox uses improvisational dance to evade the moving motion sensors at the museum. There are some bits in here I could hardly believe I was seeing.

The movie also has the confidence to skip around in the timeline, with a few of the old “you thought this was what happened, but actually this flashback will explain that this is what happened” type maneuvers. Some of them are total cheats, and I’ll be god damned if I can figure out why they would do what they did in the movie if what you find out later in a flashback actually happened earlier. But I still liked it. The personality of the movie fits the personality of the characters.

What’s best about the movie of course is the cast. I mean I don’t know how to say this right, but George Clooney and Brad Pitt in these movies are just real fuckin cool. They’re a couple suave smartass dudes who look good in their suits and know how to carry themselves like they know what they’re doing. Clooney of course is the more together one, since he’s in the title. But Pitt is more memorable because he fucks up more. One of my favorite parts is when he realizes a major fuckup he’s made and they freeze frame on the goofy look it puts on his face.

One problem though, obviously, there are so many characters. And then they add a bunch of new characters, so you don’t get to see enough of the old ones. Even George Clooney seems like he doesn’t get to do all that much. I was hoping we’d get more Bernie Mac this time around, but we got less. He spends most of the movie in jail! There better be plans for a spinoff about what happens while he’s in jail, or I’m gonna be pissed. Also we need more of them Mormon brothers. Congratulations to Matt Damon and Julia Roberts for having their roles expanded a little bit, but come on. You guys get movies all the time. Quit hogging the screen.

I guess the one minor character that gets a little more attention is the chinese gymnast, whatsisname. Not that he gets a huge part but it’s funny to see what he does with his money (he lives the lifestyle of a multi-platinum rap artist) and he continues his cross-language communication with english speakers, sort of like Chewbacca.

By the way, I have no clue who is included in the 12. Everybody from the first one, plus either Julia Roberts, Catherine Zeta Jones, the Night Fox, or Bruce Willis.

Okay, I just gave away the surprise, but Bruce Willis really does have a cameo. And Julia Roberts gets to play Tess pretending to be Julia Roberts. I agree that this kind of postmodern bullshit is old hat, but they do a good job with it. I like how Tess seems to not be wearing makeup, making her look different from the “real” Julia Roberts. I’m okay with this part, it has some good laughs. But I have to say I was very disappointed to find out that Bruce was a fucking snitch. I guess that’s what you get idolizing a fuckin republican.

My favorite aspect of the movie by far is the music by David Holmes. This is one bad motherfuckin score. I’m not ready to decide if he’s topped his OUT OF SIGHT score, but this thing’s got some scorching beats (lots of congas) and blasts of ’70s soul horns. And then it goes into this psychedelic hippie rock vibe. Pick up the soundtrack album and put it on track 10 – HOLY SHIT. It sounds like the baddest fuckin blaxploitation opening credits sequence of all time. I wanna hear that shit next time I’m strutting down the street in slow motion. Then there’s other parts, I played it to a guy, he says “it sounds like Klaus Kinski should be riding in on a horse right about now.” I mean this is good stuff.

Well this wraps up the sequel. Not a bad review I hope, in some ways better than the review of the original although in other ways not quite as satisfying. it would be nice to come revisit this review in a couple years for Ocean’s Lucky 13 or Ocean’s 3-D whatever it would be.

Brad Pitt George Clooney heists Matt Damon Steven Soderbergh
This entry was posted on Friday, December 10th, 2004 at 1:14 am and is filed under Bruce, Comedy/Laffs, Crime, Reviews. You can follow any responses to this entry through the RSS 2.0 feed. You can skip to the end and leave a response. Pinging is currently not allowed.