This is yet another twist on the TEXAS CHAIN SAW MASSACRE setup: once again a victim (this time male) wakes up to find himself a forced participant in a demented parody of a traditional family dinner. Instead of force-feeding him human meat they give him what you could reasonably assume was roadkill of some kind. In this one there’s a prom theme, so he’s been put into a tux and there’s a disco ball. 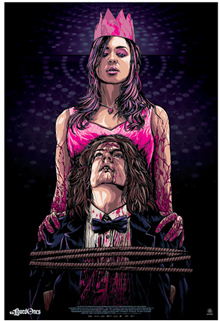 Somehow I have a harder time believing a sort of cute looking young girl like this as a Jeffrey Dahmer type than if it was some gross sweaty adult man. The combination psychotic/cute aesthetic is fun but goofy enough to keep the horror from hitting me in the gut. Still, this daughter and father combo is really interesting. There’s a disgusting sexual tension between them. It seems like the dad doesn’t mind stabbing people and hitting them with hammers but draws the line at succumbing to his attraction to his daughter. When she starts doing suggestive or sexually abusive things to Brent right in front of him dad doesn’t stop her, but looks upset, and I’m guessing more from jealousy than from fatherly duty.

Lola, meanwhile, is very jealous of Bright Eyes (Anne Scott-Pendlebury), a seemingly lobotomized old lady who acts as dad’s date at the dinner table, and is probly her mom, but might just be somebody they kidnapped before. She’s a slightly less gross and more tragic version of Grandpa in the Texas Chain Saw movies, and here this young girl is competitive with her, always doing mean things to her and making little pointed comments. It’s great.

If this was limited to this horrific mini-prom here it would be only okay, but the larger world of the movie is what makes it good and makes the far-fetched premise easier to swallow. Without ever coming out and saying it this is a set of characters dealing with traumas in different ways. Before shit meets fan there’s a vague, unexplained joke about some “emotional breakdown” in Lola’s past. Whatever it was, her and her dad have been taking it out on a whole lot of innocent people. By my count there are 5 other characters dealing with past traumas, but most of them take it out on themselves, habitually punishing themselves for things they have no control over.

From the perspective of an ’80s teen movie, Brent’s goofball friend Jamie (Richard Wilson) scored big when he got Mia (Jessica McNamee) to go to the dance with him. They get drunk and stoned and laid. She’s angry and acting out and maybe to him it’s kinda hot but he’s also having trouble even talking to her and we see the larger context of what her and her parents are going through so the whole thing becomes sad.

These characters are linked in ways that aren’t apparent at first, and you piece it together as it’s revealed through their conversations and things. You begin to understand why one character called another character when Brent was missing, why he reacted the way he did, etc. Nothing against the old NIGHTMARE ON ELM STREET type scene where the kids go to the library (now internet) and look up old newspaper articles, or the SCREAM version where everyone knows about a local crime and talks about it or sees it on the news, but this way of unrolling the backstory is more effective. It creates suspense and moments of revelation and at least once you get to discover a secret at the same time as a character does.

THE LOVED ONES is artfully photographed and scored and has good, understated performances. It doesn’t have that slick mainstream feel of the various teen horror movies that came after SCREAM. Still, the young good looking actors and the cutesy “she just wants to go to prom” premise made me feel relatively safe that it was all in good fun. Then they tied the poor guy to a chair and started carving him up with a fork, and not in a funny way. In the gory slasher movies of old the horrific moments were usually over quick, like, there’s a big buildup to when a guy suddenly gets slashed and his intestines poor out and he’s screaming and then it cuts to a new scene. This one, they got the guy captive from early on, doing horrible things that I won’t give away except for one: they literally pour salt on his wounds. Well, more like throw. But it’s alot of damn salt, and it gets worse after that. It’s grueling.

I should say that like pretty much any movie like this there are parts where he gets loose and there’s a chase and stuff, that’s the more fun horror I prefer. And the “torture” part isn’t “porn” at all. It’s the story. He’s this traumatized, depressed kid, we see how he’s cut himself up a whole bunch, he thinks about suicide. Now he has to withstand other people cutting him up, and he has to fight for this life that he previously thought he didn’t even want. So he has something huge to gain from this experience if he can survive.

I could list a couple of disgusting things that happen in the movie, but it’s the little moments that stand out to me. Like the part where the dad is chasing Brent in a car and crashes into a tree. Not just because it’s given meaning by its reflection of a crucial earlier event, but also because the dad takes a moment to examine the damage to his car before he continues the chase. Or even the scene where Brent’s girlfriend Holly comes home and lays down on her bed. She’s still wearing her fancy dance dress and shoes, but she never got to the dance, she spent the whole night looking for her boyfriend, and failed. And she just breaks down crying. It’s a touching moment in a genre not usually this sympathetic toward girlie-girls who don’t have any blood on them yet.

THE LOVED ONES unfortunately hasn’t come out in the U.S., but there’s a region 2 PAL dvd that I rented. I guess “The Loved Ones” is also the name of an Australian band, I’m not sure what significance that has so maybe us Region 1ers can’t be trusted to understand the reference. We would’ve got it if it was “Men At Work” but unfortunately there was already a movie under that title.

Australian cinema Robin McLeavy Sean Byrne Xavier Samuel
This entry was posted on Sunday, October 9th, 2011 at 11:47 pm and is filed under Horror, Reviews. You can follow any responses to this entry through the RSS 2.0 feed. You can skip to the end and leave a response. Pinging is currently not allowed.

23 Responses to “The Loved Ones”