Months ago over on kungfucinema.net I read a post about the Hong Kong Film Awards nominees for best picture. They were all some sort of action movies – now there’s a country that has its cinematic priorities straight. (Plus I did some reading and found out that in 2005 the HKFAs made a list of the 100 greatest Chinese movies of all time and A BETTER TOMORROW was #2. I can get behind that.)

The only nominee I’d seen already was IP MAN 2, but there were two nominees I’d been planning to see: John Woo’s REIGN OF ASSASSINS and Tsui Hark’s DETECTIVE DEE AND THE MYSTERY OF THE PHANTOM FLAME. Then the other two were STOOL PIGEON and GALLANTS.

Wouldn’t it make me a real fuckin innovator if I completely ignored the Oscars but made a huge deal about the Hong Kong Film Awards? That would’ve been pretty good. Too bad I did make a big deal about the Oscars and that the HKFAs happened about 5 months ago. So in my opinion I’m a little late on executing that idea, but back then it seemed like an achievable dream. The writer on kungfucinema said this GALLANTS was the best and wished it would sweep all the top categories, so I tracked it down first. Then I wrote a partial review and forgot about it for months until I finally saw DETECTIVE DEE. 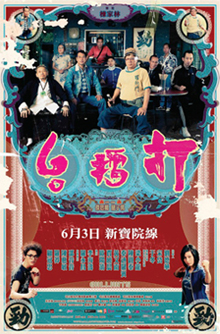 GALLANTS is about a put-upon nerd named Cheung (You-Nam Wong) sent by the real estate office he works for to a small village. Although he is an adult male he gets bullied by a little kid there and has to get rescued by an old cripple (Siu-Lung Leung).

Cheung follows the old man to a tea shop called The Gate of Law. Turns out The Gate of Law used to be a martial arts club, but the master (Teddy Robin Kwan) has been in a coma for 30 years, watched over by his now elderly pupils Dragon (Kuan Tai Chen) and Tiger (the cripple). Soon they clash with another martial arts club that’s organizating a big tournament and also trying to foreclose their property or something. Cheung is supposed to be there for his job but he starts to believe in the grumpy old men and wants to learn kung fu from them, which in my opinion is a good idea considering there are so many little kids, old ladies, small animals etc. out there. It’s a dangerous world for a guy like him.

So it’s a movie that uses old men fighting as both a joke and a heart-string tugger. They wear thick glasses and fanny packs but do real kung fu. It really seems like they got the idea from the old masters in KUNG FU HUSTLE – they even got the same guy that played The Beast playing Tiger. They also have alot of the cartoony shit including a chirpy sound effect when a guy gets hit in the balls. But I read an interview with one of the directors and it sounded like they kind of came to this idea separately. So maybe it’s not a copy but it’s not good when it keeps reminding you of another movie that you kind of wish you were watching instead.

Part of the story is that the master wakes up and he turns out to be a goofy little troll of a man who’s a womanizer and an asshole. He just immediately begins insulting everybody and making ridiculous demands, and to be honest I didn’t even like looking at the little fucker, he’s an obnoxious little monkey man that I quickly hoped would achieve re-comatosis.

(To be fair to Teddy Robin he is apparently a talented dude, he also composed the score and was a pop star under the name Teddy Robin and the Playboys. The Playboys do not appear in GALLANTS.)

These are real martial artists so the fights are legit, but I didn’t find them exciting at all. They just don’t really innovate or even do anything too spectacular other than having some funny looking old guys doing the moves. I really can’t relate to kungfucinema wanting this to win best choreography over Sammo Hung’s great work on IP MAN 2. I looked it up though and Sammo won.

I think people rooted for GALLANTS because it was an underdog, a lower budget movie and not a big historical epic. It takes place in the modern day in a small town, it’s very nostalgic for the old Shaw Brothers movies and stuff, and it’s got that universal appeal of the old guys talking up the old values that are being ignored today. The bad guys are these competitive assholes that teach martial arts for the money, they’re shown as being disconnected from the ancient traditions and values.

But filmatistically I would argue that the movie itself is disconnected from the ancient traditions and values. Like so many Hollywood movies now it’s alot about trying to stylize the shit out of each individual shot and not so much about connecting the shots into a fluent, well-timed piece of communication. The movie has two directors (Clement Sze-Kit Cheng and Chi-kin Kwok) and they’re not like the CRANK dudes but they are the type who have very little restraint when it comes to cramming spazzy visual gimmicks into their movie. Every time a major character is introduced they freeze frame and credit them like in an old Shaw Brothers trailer, so 45 minutes into the movie they’re still crediting the actors. They got a bunch of sped up shit and flashbacks done as scratchy old movies or 3-Dified still photos and flashes of x-rays when people get punched and shit like that. And the nerd guy is very over-the-top, he acts more like a dude in a commercial for a children’s sugar product than a human being. I found the whole thing a little obnoxious. 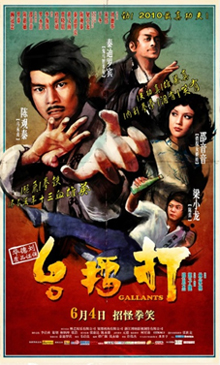 Luckily these boys do have the sense to calm things down sometimes, slow down, get quiet, and try to get some of the ol’ emotion out of these characters. I think it’s meant sincerely, and it’s also nice to see a Chinese movie that doesn’t seem like some kind of veiled government propaganda. But I still think the values of the story are questionable. The Master was said to be a harsh teacher, like a Pai Mei type I guess, and when he wakes up he definitely is cruel and selfish. And here are these poor guys who have dedicated their lives to taking care of him because they think he’s this great martial artist.

I’m pretty sure it’s supposed to be a heartwarming tale of inspiration, but to me it’s a tragic story. At the very end of his life (SPOILER) the master says a couple nice things to his two lackeys, revealing that he was more observant than he let on, and hearing those compliments inspires them in their lives and fighting skills. Okay, that’s cute.

But the movie acts like that makes it all okay, like it’s supposed to legitimize their relationships. I don’t buy it. Too little too late. Yeah, I’m glad he was able to give them some kind words at the end, but they still spent decades wasting their lives for the benefit of a guy that treats them like shit.

And that might be a good way to teach kung fu, but what good does it do them now? They’re old, and they can already fight good enough to protect the nerd guy from the little kid. What else are they gonna need it for?

I don’t mean to entirely dismiss GALLANTS. It’s got some entertainment value and some unique aspects. I just think it’s flash and posturing over substance and if that’s gonna be the case I want some way better flash and posturing.

Hong Kong Film Awards Teddy Robin
This entry was posted on Monday, September 5th, 2011 at 12:31 pm and is filed under Action, Comedy/Laffs, Martial Arts, Reviews. You can follow any responses to this entry through the RSS 2.0 feed. You can skip to the end and leave a response. Pinging is currently not allowed.