Guess who’s in comics books? (answer: em) (hold up to mirror for answer) 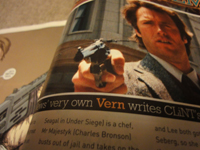 The internet belongs to the nerds. Or to the geeks, I forget which one. I always get alot of grief for getting the lingo wrong, I mix up “nerd” with “geek” and I say “comic strips” instead of “illustrated graphic novels for grown adults” and I say “Ziggy” instead of “Tom Wilson’s Ziggy.” I’m either confused or sometimes just jokin around but I mean no harm and people still get upset. Especially if I do it on The Ain’t It Cool News everybody acts like I yelled out the n-word or something. I would write several paragraphs of detailed and thoughtful analysis laying out a series of arguments and backing them up with examples but if I chose “comic strip” instead of “comic book” to describe a stapled together pamphlet of non-comical drawings then that would be all they would respond to and declare my input invalid.

And I used to try to be polite and apologize to these people but no more, because now I AM IN A FUCKING COMIC STRIP. Or at least between some of them. My cool British publisher Titan is publishing a comics magazine called “CLiNT,” and I have a column in it starting with issue #3. So if you want to read “Nemesis Chapter 2” and “Mahatma Gandhi presents Space Oddities” you will have no choice but to flip past the words that I wrote. WHO’S LAUGHING NOW, MOTHERFUCKERS?Here’s what the cover looks like: 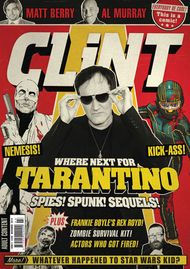 But the inside is about 90% comic strips such as KICKASS 2 and something about Jesus and one that’s about gangsters. The magazine was started by Mark Millar, who I guess wrote the comics versions of KICKASS and WANTED before they were movies, and he and some other guys write it, and there are nice drawings maybe you boys would like. You can see some samples at their websight. My column is called BADASS CINEMA 101. Sorry, I named it at the last minute and it was before badassdigest.com started and made it their mission to run my favorite word into the ground and ruin it forever. (otherwise they are a pretty good websight so far.)

CLiNT is made for the UK market I believe, so I don’t think you’ll be seeing it at too many American newsstands, but somebody told me they saw it in a comics shop. I hope to use it to teach some fundamental badass cinema knowledge to the British youth so we don’t end up with more The Original Pauls loose on the streets causing problems. Just kidding, The Original Paul.

In other Titan news they’re now gonna be distributing all the Hardcase Crime books, which is pretty cool. I think that makes our books some kind of distant cousins or something.

“I don’t mind the ads…What I do mind are these hammy ‘columns’… I mean honestly, it’s not like this rag is an aberration or an insult to the industry… Millar is a great writer and a talented storyteller and he proves it deep inside the pages of CLiNT. It’s just a shame you have to wade through so much sludge to get close enough to see it.”

This entry was posted on Tuesday, November 9th, 2010 at 10:18 pm and is filed under Blog Post (short for weblog), News. You can follow any responses to this entry through the RSS 2.0 feed. You can skip to the end and leave a response. Pinging is currently not allowed.

34 Responses to “Guess who’s in comics books? (answer: em) (hold up to mirror for answer)”