CITY OF GOD, CITY OF MEN and NEWS FROM A PERSONAL WAR got me interested in what’s going on in Brazil. For further research I decided to check out this video I’d always meant to see, an enlightening travel documentary about Arnold Schwarzenegger visiting Rio De Janeiro during Carnaval.

You young people probly think Schwarznegger is merely the governor of California who used to star in great movies like COMMANDO and TOTAL RECALL, but in fact he is also the former Mr. Universe and notorious horndog. This was 1983, after CONAN THE BARBARIAN but before THE TERMINATOR, and it’s the sort of video that probly mostly played after midnight on Cinemax.

(You young people probly think Cinemax was merely a channel that showed movies. In fact it was what kids used to see boobs before the invention of the internet if they couldn’t find their dad’s stash of Playboys.)

Arnold starts out going to a touristy night club where nearly naked women dance sexy on stage in what is packaged as a celebration of Brazilian tradition. He sits in the front booth having a drink with a date (one of six he has in his five day trip, by my count – not including women he just flirts with or kisses on the cheek). His voiceover narration tries to combine leering with education: “During Carnaval gorgeous mulata bodies move in ways even a fitness expert like myself can’t believe.”

It’s not a strip club or anything. Arnold does compliment the skills of the male dancers. But he’s much more impressed by the women. He yells things like “All right, I like that! Yes!” and stands up and claps. At one point he makes his hands into binoculars and ogles with a shit-eating, gap-toothed grin.

His date tries to explain the cultural background of the ass-shaking. “The Brazilians believe that the sacred part of a women is the ass. But the Americans–”

“No no,” interrupts Arnold thoughtfully. “I agree with the Brasilian’s point of view.” Later he narrates, “You know something, after watching the mulatas shake it, I can absolutely understand why Brasil is totally devoted to my favorite body part: the ass.”

Eventually the emcee calls him on stage to dance with the ladies, and sure enough he reaches for his favorite body part/the body part Brazil is totally devoted to. Also he dances in a style not that different from how Jean-Claude Van Damme dances in KICKBOXER.

The next day Arnold watches a capoeira demonstration on the beach. He talks very respectfully about the artform, how it combines martial arts and dance, etc. But when they’re done he zeros in on the one female fighter, lifts her up with one arm and kisses her on the cheek.

At night he goes to a huge dance party dressed in a fake Native American costume, his date dressed as Cleopatra. It’s hard to say whether his dancing in this scene is more damaging to his image as a governor or as an action star. You know what’s weird about Arnold in this video – it’s not surprising that he’s so horny. Conan might be the same way during peace time. What I didn’t expect is that the dude just seems like a dumb stoner. He has that goofy pot smoker’s laugh. He says sleazy things and smiles like a mischeivous little kid.

But he is bringing us along on his tour, so he shows us what he’s learning. He tells us about something “the Brazilians eat” called “fish water,” which despite the name looks like an expensive dish. And I’m pretty sure the Brazilians in CITY OF GOD do not eat fish water. When Arnold was Mr. Universe he travelled around the universe, but I think he was pretty ignorant or at least naive about what was going on in all of its quadrants. He just wanted to go around lifting pieces of metal or small women, he didn’t want to worry about suffering and oppression. I always remember that scene in PUMPING IRON where he’s in apartheid South Africa and doesn’t seem at all uncomfortable being waited on by black servants. This isn’t as bad, but it seems like he really believes Brazil is one big sexy beach resort.

There is some footage of the Carnaval parade, but more time is spent on the beach. There’s a fitness area where he starts working out and there’s an obviously staged moment where a woman stops to check him out, then spends the rest of the day with him. He becomes her sexually harassing personal trainer, telling her what exercises to do and spotting her in ways that seem awfully convenient. Also there’s an interlude where Arnold is not there, it’s just white gauze over the lens and soft focus on a topless lady tanning, jogging in slow motion, caressing her breasts in the water, then in a swimming pool.

This is sleazy shit, but don’t worry, I’m not trying to indict Schwarzenegger. This was when he was practically a kid. A 36 year old kid. Seriously, you can’t erase this from his past, and just because you play a barbarian in the movies doesn’t mean you can go around grabbing everybody’s tits. But I do think he’s smarter now. I forgive him. I’ve even warmed to him as a republican governor who has done some good things sometimes. I respect him. But to be honest I might just be succumbing to propaganda. I am susceptible to the awesomeness of a governor having this in his office: 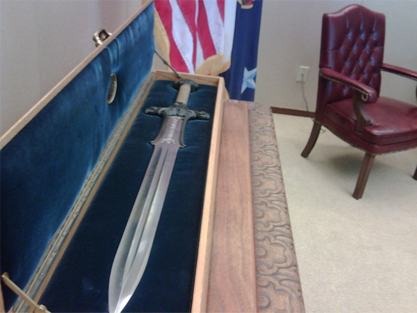 I mean Jesse Ventura may have had a stronger record as a maverick governor, but as far as I’ve heard he didn’t have Ol’ Painless displayed in his office. And notice there is no glass on there. It’s not locked down. Governor Schwarzenegger does not maintain a no-wielding policy. And I can prove it: 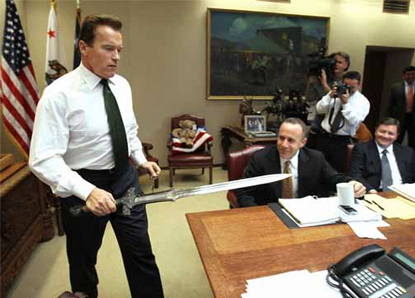 Those guys are all smiling, but so was that white guy at the beginning of the Wang Chung scene in BLOOD AND BONE. They don’t necessarily know where he’s going with this.

Maybe the guys in the picture are the rights owners to PARTY IN RIO. Apparently it’s an extremely rare video, and I don’t expect to see it hit the Warner Archive any time soon. The store where I rented it requires a $500 deposit. They said during the California recall election they got calls from the Jimmy Kimmel Show trying to borrow it, which must mean they couldn’t find the footage anywhere in California.

But if you ever see it I think you’ll get a kick out of it like I did. They got some funny shit on VHS.

13 Responses to “Party in Rio”