Hardy seems a little self-conscious at times, but then so does the character. The important thing is that he throws his full weight into the craziness, spending a good deal of the movie naked, smeared in paint, getting in knock down fights with the screws, yelling that everybody’s a bunch of cunts. One of his main hobbies is taking hostages, even though it never seems to get him anywhere. I like when the warden asks him what he wants and he thinks about it for a second and asks, “Well, what’ve you got?” Usually his only demand is a disgusted “Fuck off,” which is too bad because I read that the real guy likes to make demands like an inflatable doll, a helicopter and a cup of beans. 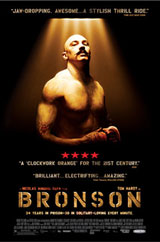 They do try to play him for laughs, like in the (completely made up I guess) section where he gets out and tries to fit into society. They have a long scene of him in an uncomfortable suit trying to smile and be polite while awkwardly drinking a giant, fancy cocktail covered in umbrellas and shit. Director Nicolas Winding Refn, who did those PUSHER movies, gets a pretty good look going, very carefully designed and staged.

I guess my favorite part is when he’s in an asylum drugged up and it takes him forever to do regular physical activities. In one scene he spends minutes trying to spit at a guy, in another he slooooooowly walks across a gym floor while the other inmates dance goofily around him. They all look like zombies, but especially him.

I’m not familiar with Refn’s other movies. From this one it seems like he has chops, but like with Hardy there were times when it kept nagging me that the guy’s putting on a pose, playing dressup. Both of them mostly pull it off, there are just little moments here and there. The constant use of classical and choral music struck me as a little pretentious, made me think of that nut that did AMERICAN HISTORY X and then dressed up as Osama bin Laden in Marlon Brando’s acting class. But I guess it’s kind of a cliche to use that kind of music for an insane asylum, so maybe he’s not really trying to be arty. Anyway, it was a good move because it tricked all the critics into saying it’s like A CLOCKWORK ORANGE. I checked a couple reviews just now and was amazed that they didn’t mention a way more obvious comparison: fucking CHOPPER. Maybe that movie’s not as well known as I thought it was. 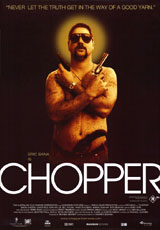 I enjoyed BRONSON enough, but I can’t avoid comparing it to CHOPPER. It’s not the exact same story, but it’s the same damn recipe: heavily buzzed film festival favorite where previously obscure actor completely physically transforms himself and gives balls-to-the-wall performance in a fictionalized, meandering first-person-narrated portrait of a real life repeat offender criminal who spends most of his life in prison and becomes a celebrity for his insane, violent exploits and unrepentant bravado, starts career as writer/artist, seems to think he’s sticking it to the man. And just by definition that means they end up having a bunch of similar content: attacking somebody to try to get transferred, getting chewed out by the warden, spinning headline montages, smiling crazily into the camera, playful filmatistic gimmicks to try to make a bunch of scenes of standing around in prison cells less boring.

That’s fine, but the problem is that I think CHOPPER’s alot better. Both live or die on how interesting the title character is, and to me movie Chopper is way more interesting than movie Bronson. See, Bronson’s real in-your-face about how crazy he thinks he is, how evil. He’s so proud of himself, so cocky, like a baby who just shat his diaper and thinks it’s hilarious. He even appears on a stage as if he’s hosting the movie, sometimes wearing clown makeup (craaaazy!) and he actually cackles.

Chopper probly wants attention just as badly, but his method of intimidation is more original. He’s a maniac too (the man has somebody cut off both his ears, for example) but he’s funny. He makes you laugh and feel bad for doing it. He threatens you by being overly friendly, making small talk and jokes. He’s a master at the fine art of avoiding the elephant in the room, and he is the elephant, and that’s the whole problem is that he’s in the room with you. He’s way scarier, and yet way more likable than Bronson.

Chopper also has more facets to him. He has remorse. He stabs people and then feels bad about it, apologizes and stays to comfort them while help is on the way. And he has his hobby of killing criminals and pretending he’s on some vigilante mission of justice, using that bullshit excuse to play the cops like a fiddle. He outsmarts everyone. Yeah, he’s cocky too, but he earns it more.

Nothing against the real guy, but in the movie Bronson doesn’t seem to have as much depth. He’s a tough bastard, but that’s about it. He does some funny crazy shit sometimes (like paint on an art agent) but he’s basically stupid, just a brat kid in an adult body, throwing a fit at everyone and everything. He’s G.G. Allin without the music career. When he gets locked up after 69 days of freedom he says he’s “building an empire,” and I actually found myself siding with the uptight warden who bluntly says, “You’re ridiculous.” And you might be supposed to agree there, and also when the guy calls him “pathetic.” But I don’t know man, earlier in the movie it really seems like you’re supposed to think he’s alot cooler than I did. And at the end you see how his life gets worse and worse from all his lashing out, but it’s like yeah, no shit. You learn that around the same time as toilet training, usually.

I guess the movie just doesn’t communicate to me what’s supposed to be special about this guy. He punched more people than anybody else in British prisons? Put him in the Guinness Book, but I don’t know about a whole movie. Maybe start with a Christmas special. The Peanuts always worked better in short specials than as movies, so that might be the same with Bronson.

But maybe I’m extra harsh on this guy because of his crimes. I don’t care about him stealing money of course, but the sonofabitch stole one of our precious American resources, the very stage name of one of the all time great badass icons. What’s going on over there, fellas? I love you British, you published my books and released the new Seagal movie. But you got this guy trying to steal “Charles Bronson” and that director last year with the nerve to use the name “Steve McQueen.” And I can tell you’re eyeing “Lee Marvin” and “Clint Eastwood.” I can feel it. So let it be known that they’re off limits. Lay off, guys.

As far as the MAD MAX issue – Variety has confirmed that Hardy is cast in FURY ROAD, but didn’t say who he was playing and made a bigger deal about Charlize Theron, which would indicate that he’s in a supporting role. But the Hollywood Reporter reported (from Hollywood) that he was replacing Gibson as Max. Using a combination of IMDb and crude math skills I have figured out that Gibson was 29 when he did BEYOND THUNDERDOME (makes you feel old, huh?) and Hardy is now 32, so the age is about right. Throw a white streak of hair on him I guess.

I don’t think he’s a bad choice but I was hoping if Gibson wouldn’t do it they’d at least replace him with another little known Australian. Or with the actual Charles Bronson (the original one from DEATH WISH), but it’s a little late for that. We’ll see how Hardy turns out. I wish Gibson would come back, but to me George Miller is more important than Gibson and I’m willing to make that sacrifice to see what he has in mind for that world. Hopefully it’ll be worth it.

Anyway, BRONSON’s okay I guess. I wasn’t as into it as I was hoping, but I sort of liked it. They might want to go the HAVOC 2: NORMAL ADOLESCENT BEHAVIOR route and just release it on video as CHOPPER 2. There’s a little bit of bareknuckle boxing so UNDISPUTED 4 would be a possibility too, but I’d rather they save that title for Marko Zaror.

Nicolas Winding Refn Tom Hardy
This entry was posted on Tuesday, November 3rd, 2009 at 12:49 pm and is filed under Drama, Reviews. You can follow any responses to this entry through the RSS 2.0 feed. You can skip to the end and leave a response. Pinging is currently not allowed.