You could definitely compare the movie to HARD TIMES. It also made me think of LIONHEART because it’s this circle of rich assholes setting up underground fights in different weird locations. But honestly it’s more Spike Lee or Martin Scorsese than Jean-Claude Van Damme. This is not the slick Hollywood movie I expected, it’s a gritty New York movie, layered with texture and naturalism. It makes you feel like you’re in New York, surrounded by people, hearing sounds coming from all directions. It’s all shot in interesting, dirty and cramped locations. The dialogue sounds partly improvised, mumbled and overlapping, sentences that trail off. 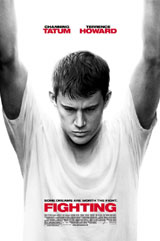 Channing Tatum (seen strung up to the right) plays Shawn Macarthur, a homeless dude in New York selling fake Harry Potter books on the street. When some kids steal his money and he fights back he catches the eye of Terence Howard as Harvey, another two bit hustler who decides to manage him in the underground fights.

In a way that makes it exactly like every other fighting movie, but this one is different. Harvey isn’t an inspirational visionary or even a cheating scumbag. He has a little bit of both but mostly he’s kind of a whiny grandmother type. He has a messy apartment and stacks of tickets to Broadway shows that he scalps. He offers Shawn free tickets to Wicked or Legally Blonde, but he never accepts.

Harvey is competing against two other fighter managers played by Luis Guzman (MAGNOLIA, THE SUBSTITUTE) and Roger Guenveur Smith (DO THE RIGHT THING, MERCENARY FOR JUSTICE). They’re not in it that much (it’s not called MANAGING) and those are the only recognizable faces in the movie. That includes the much younger dudes who hang out with Harvey, I thought maybe they were his kids but maybe not. They become Shawn’s entourage, dudes who tell him good job but don’t have much else to offer. I like seeing people in movies that just look like actual people you would see around and not really know what their deal is. Just, you know, those guys that go to Shawn’s fights with him.

I like that it’s not glamourous. Even when Shawn starts being successful he never lives the high life. When he makes money he puts it in his sock. Harvey keeps his winnings in a suitcase hidden in the piles of crap in his living room. Luis and Roger have a fancy office but it’s hidden in the back of a 99 cent store behind a money-themed beach towel.

Shawn’s not very macho, either. He’s the introverted Van Damme. Sure, he’s got muscles and wears a tank top. And he wants to win. But he never glories in being a champion. Courting his woman he’s shy and awkward. He’s very polite, constantly thanking or apologizing. He doesn’t try to show off his street cred like Vin Diesel or somebody would. He tries to hide that he sleeps on the street, he’s ashamed of it. When he first hooks up with Harvey he knows he’s a commodity to him, but he’s just doing what he has to to get some money and looks kind of embarrassed about it, like he’s a prostitute.

Another weird thing that kind of subverts the genre: you hardly ever see him training or practicing. And you don’t hear about him knowing any special fighting styles or moves. It’s not about him trying to get better. He’s just a tough guy, they have faith in him being able to fight. Maybe they just get lucky. Before the final fight he finally trains: he does clap pushups on the subway. Beat that, Rocky. You thought you were low budget with the meat thing, but meat is expensive. Shawn probaly jumped the turnstile too.

At first I was disappointed that the fights were shot in the 2009 style, closeup and handheld. But they won me over. You all know I prefer stylized fights with choreography, show-offy moves and clear staging, but most of that honestly wouldn’t work in this movie. Some of these fights feel very real, with an obvious UFC influence. There’s one behind a convenience store that feels like the audience-recorded bootleg of a concert – your view is sometimes blocked by the crowd, and you can hear people talking over the grunts of the fighters. Another one, inside a fancy apartment, has some chokeholds and drops that look deadly. And the final fight is just brutal. There’s one fight against a guy who I thought “Now come on, he couldn’t possibly beat this guy.” And then he didn’t. (I guess one guy he defeats is a well known fighter who could kick his ass, but I thought they made his come-from-behind victory more believable than many fight movies. It’s not one of those things where he beats him by using slow motion.)

But this is not much of an action movie, it’s more of a drama. It’s about relationships and quiet moments and shit. And they work. I think LIONHEART is a pretty well directed action movie, but this is the type of movie that focuses much more on the directorial craft and less at making the main character and his physical activities look cool. The setting is the most important character I think, the huge buildings, the weird people coming by mumbling random shit, Harvey whining at them to move along. Because you see this city you understand the characters better and what they’re struggling against. My metaphorical hat is off to director Dito Montiel of that movie called A GUIDE TO RECOGNIZING YOUR SAINTS that I don’t even know what it’s about but I think it has Channing Tatum in it also.

Tatum barely seems like the same stiff guy from GI JOE. He’s much more natural. The character is kind of a meathead, and he talks with what you might call a “white rapper accent” (or even a Seagal accent) so that probaly bugs people. But I liked him. I also think this is probaly the best Terence Howard performance since HUSTLE & FLOW. I wasn’t excited about him being in this, he’s been pretty generic in movies like THE BRAVE ONE and GET RICH OR DIE TRYING, but here he gives his own weird flair to the character that I can’t imagine anybody else doing. According to the brain trust at the IMDb message boards “OMG, this has to be the worst acting in a movie ever!!! What happened to Terrance Howard? He is a good actor, but in this movie he talked with some kind of odd accent, it was weird.” But I like him because he’s not your typical movie character, he’s not cool, he’s kind of pathetic, but I also kind of felt sorry for him. He has all the same problems that Shawn has but he’s a little older so he tries to pass himself off as more in control. Still, his voice shows his constant disappointment in the way things keep turning out.

Some people would probaly argue that this is a best of neither world type situation where somebody looking for a bunch of Van Damme kickboxing would be disappointed because it’s not really about fighting, and somebody wanting an independent drama wouldn’t like it because it is kind of about fighting and doesn’t try to go that deep into the characters, just more than you would in BLOODSPORT. But personally I think it’s a nice balance. It has some of what I like about both types of movies and makes for an unusual combination.

Channing Tatum Dito Montiel MMA Terence Howard underground fighting
This entry was posted on Monday, August 24th, 2009 at 11:57 am and is filed under Action, Drama, Reviews. You can follow any responses to this entry through the RSS 2.0 feed. You can skip to the end and leave a response. Pinging is currently not allowed.