After seeing the surprisingly-good-although-probaly-still-shouldn’t-have-been-made remake of IT’S ALIVE, I got to thinking that I’d never seen the sequels to the original. And I was wondering about this ISLAND OF THE ALIVE concept in part 3, so I figured I better get part 2 out of the way first. I wasn’t really sure how you make an exciting sequel to a movie about a killer baby, it’s probaly just gonna be more of the same for the first sequel. Even the title, IT LIVES AGAIN, seems to indicate it’s gonna be a rehash. 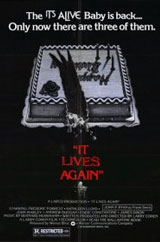 But it’s not. It starts out with a big house party, a baby shower. And as the guests start to leave the happy couple realize that neither of them knows the guy still sitting on the couch – it’s Frank Davis (John P. Ryan), the poor father from part 1, and there’s an uncomfortable social situation when he won’t leave without talking to them. And then they realize they saw him in Time Magazine as the father of “the Davis Baby.”

Frank talks to them about his monster baby and that others like it have been popping up. This was 1978, you remember how it was back then. Cocaine, disco, fear of babies that will eat your throat out. He says the doctors are testing mothers’ blood to find out who might have a mutant bun in the oven. And even now the government has a team on hand to handle it – he points out a guy staking them out from across the street.

But he’s not the crazy old man warning them of a killer in their midst. He feels bad about shooting his baby, and wants to help them protect theirs. When the mother goes into labor it turns out everything Frank said is true – the government is spying on them, the doctors are ready to kill the baby on sight, and Frank has an underground operation in place to fight back. He takes the mother out of the hospital at gunpoint, brings her to a team of doctors in a mobile labor room and then brings the baby to a secret laboratory where they have another baby in a cage.

Man, this is a cool movie. The good guys are trying to save these babies, they’re doing the right thing, they’re very humane, and they’re taking their responsibility as parents seriously. You could see it as a parallel to a parent who finds out their kid is gonna be deformed or disabled or something, and choose to have them anyway, and love them. Or it’s kind of like our version of the “Australianess” I was talking about in DARK AGE and THE HOWLING III, where people try to protect even “monsters” as part of nature. But the unfortunate part is the babies don’t give a fuck if you help them or not. They’re not grateful, they’ll betray their parents at the drop of a hat. They have claws. They have sharp teeth. They’ll fuck you up. I’m not sure if they ever explain how anybody can change their diapers, it seems like that would be hard.

I’m not sure what this movie says about abortion. Again, there is a pretty strong argument for aborting these particular babies. On the other hand the way the government tries to kill the babies seems like a paranoid right wing fantasy straight out of some nutbag’s anti-Obama political cartoons. But I don’t think it’s seriously arguing that this is the world we live in. It’s just getting drama out of a crazy situation that would happen in a world of killer babies. You will believe a baby can kill.

When the father is first taken to the lab where the babies are kept in cages he seems to regret his decision. Except for a little back-of-the-head shot the babies are kept off screen for this scene. You just hear their gawd awful catfight wailing and see the look on dad’s face. He looks as uncomfortable as David Thewlis did on the Island of Dr. Moreau. When you do see the babies later on the effects are great. The claw closeups are still kinda silly but when they show the head it looks great, a little baby Chucky kind of dude crawling around. One of them gets loose and attacks a kid’s outdoor birthday party (see poster).

There’s also a bunch of cool subterfuge involved in the underground baby protecting organization. The mother gets picked up by a fake city bus and taken to safety. Meanwhile the government are sneaking around trying to find her. There’s a meeting that takes place at a showing of ENTER THE DRAGON. This scene is not very believable though because the people in the crowd look completely unimpressed and disinterested in the movie.

By the way, TEXAS CHAIN SAW MASSACRE director of photography Daniel Pearl is credited for “additional photography.” I’m not sure how much of the movie he did, but Larry Cohen explains on the commentary track how he shot the opening credits in Cohen’s swimming pool.

This is a great sequel. It builds on the concepts of the first one, the world-wide implications of what happened. It’s not just more killer babies, it’s what would happen after killer babies. It ups the ante, it goes where you don’t expect. I think I kind of like it better than the first one.

Larry Cohen
This entry was posted on Thursday, July 23rd, 2009 at 11:17 pm and is filed under Horror, Reviews. You can follow any responses to this entry through the RSS 2.0 feed. You can skip to the end and leave a response. Pinging is currently not allowed.

24 Responses to “It Lives Again”