But after this one I’m with you guys, I give up on Shyamalan. And it has nothing to do with twist endings (there isn’t one in this movie). This is just a bad movie that blows it from the beginning and gets more silly as it goes along, and there isn’t even much of the technical skill he used to display to make up for it. 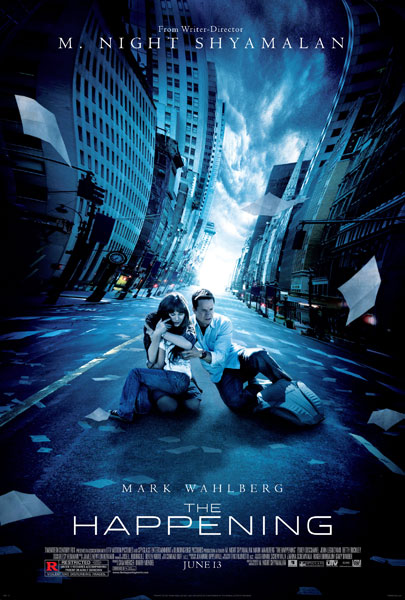 The movie (loosely based on WHAT’S HAPPENING? I believe) is about a day when all the sudden everybody in Central Park just snaps and commits suicide. It’s assumed to be caused by a terrorist attack, but then it starts happening at other places, and not just in major cities. The story follows science teacher Mark Wahlberg and his wife Zooey Deschanel as they try to find somewhere safe to go, etc.

It’s a scary idea with some creepy death sequences and you’d think the Shyamalan of those two Bruce Willis movies would be able to make it, as they say on the covers of DVDs, “Scary as hell.” But to me the movie never, even at the beginning, feels real. The opening is kind of like NIGHT OF THE LIVING DEAD or VILLAGE OF THE DAMNED, two great movies to emulate. Except in this one, instead of taking a little time to establish everyday life before something odd starts happening, it takes about 3 sentences of conversation on a bench before everybody starts killing themselves.

As the disaster spreads there are just too many things that don’t ring true at all. One that really bugged me was when some construction workers see their friend fall of the building they’re working on, thinking it’s an accident – and their reaction is to stand there in awe. There’s no fuckin way! Have you ever seen somebody get hit by a car, or an old lady fall down? People might hesitate for a second, but then they run in from all directions and try to help. These construction workers see their buddy fall down and they just stand there, then one guy walks toward him and says “give him some room.” Then another guy falls, and they just stand there for him too. It doesn’t make any sense.

Another one: a woman in a crowd is talking to her terrified daughter on a cell phone, and tells the daughter to keep looking out the window next to the tree. Wahlberg (who does not know her) tells her no, tell her to stay away from the window next to the tree, so she does tell her that. Then he starts telling her questions to ask. Then when the girl starts talking nonsense (the first symptom of the toxin) the woman puts the phone on speaker and holds it up so everyone in the crowd can hear. And as the daughter is apparently killing herself the mother allows Wahlberg to take the phone away from her and listen. It’s as if the movie was made by a guy who just woke up from a 20 year coma and has not had a chance to reacquaint himself with human behavior.

It’s like the problem alot of you had with Indiana Jones. A couple things like this wouldn’t kill a movie, but the camel is covered in ten tons of straw before it even steps out into the desert. This movie is mostly made up of odd, not believable behaviors. The whole point of a disaster movie is to make it feel like it’s really happening (get it? happening.) It’s kind of amazing how fake movies look after 9-11. Didn’t you learn what it was like to really experience that kind of terror? So why do you have all these phony news reports pop up to convey all the information you want: experts say it is a terrorist attack. Experts say it might not be a terrorist attack. Most people believe it’s the government, because a confidential source said the CIA has a secret base in the northeast. What the fuck? Do people who make movies just not get cable? I don’t understand how you put these in movies and expect people to accept them as actual news broadcasts.

I think this is a problem he started having with SIGNS. Maybe he’s better at small stories about a few characters. Once he starts trying to depict world-wide disaster it’s clear that he doesn’t get out much. The other problem that started with SIGNS that is a big one here is his “sense of humor.” He’s trying to build this serious tension and then for some reason he thinks it’s funny to have a guy talk about how he thinks hot dogs are underrated. Worse, he seems to think it’s a good idea to put most of the “jokes” in at the end, when the tension should be highest. He has a mostly dead serious movie about a sudden disaster that seems likely to end the human race, and in the last half hour he decides to have a little comedy routine about Mark Wahlberg talking to a plant.

Wahlberg I’m afraid is pretty bad in the movie. I like the guy but he’s not the kind of actor who can play all different types. He sort of needs to stick to working class. As soon as he starts using the word “whom” you got a problem. And here he has to deliver alot of terribly written dialogue where, based on only basic information he comes up with a theory for why this is happening (get it again, happening), that’s obviously supposed to be correct.

And that’s another thing. SPOILERS AHEAD. You knew this being 2008 that the reason for THE HAPPENING would involve the environment, right? But the novel twist Shyamalan puts on it is pretty fuckin funny. I had to put on Stevie Wonder’s Journey Through The Secret Life of Plants to write this review in honor of Shyamalan’s revival of ’70s new age theories. The movie argues that plants can communicate with each other and are pissed at humans and are releasing toxins in order to defend Mother Earth from the humans. I had trouble holding back laughter in the scene where, after enough hints have been dropped that this is what’s going on, a soldier says “whoever’s doing this may be watching the roads” as he stands on a road with a bunch of trees behind him. LOOK OUT BEHIND YOU!

And I swear on Christ’s rarely used crutch that there’s a scene in this movie where a little girl is playing on a rope swing and the camera keeps panning up to the branch it’s tied to as if you’re supposed to be scared. Did you see the expression on his bark? He looked fuckin pissed!

I don’t know, man. Nice try coming up with something new, but I had trouble finding this premise not hilarious. There’s a scene where Wahlberg is in sort of a cabin and there’s pounding from outside and I was hoping the door would swing open and there’d be a GARFIELD style computer-animated Lorax standing there with a pissed off look on his face. That would be a good Shyamalan twist for you.

It’s kind of weird that there’s a whole wave of “suddenly everybody snaps and turns violent” type movies now. There’s this one, THE SIGNAL, there’s the Stephen King book called CELL I think that’s supposed to become an Eli Roth movie, I think there’s some other ones, and then there’s 28 DAYS LATER which is pretty similar. Must be something in the post 9-11 air about this particular theme, I’m not sure. But I’m pretty sure if it is remembered as a late oughts cultural phenomenon this will not be the movie anybody points to as representative. It’s a bad movie and not even that crazy of a bad movie, so I’d honestly recommend watching LADY IN THE WATER before this one. That one has more unintentional laughs and a couple monsters here and there.

So I don’t know what it was, I don’t know if I was just wrong about this guy ever being good, if those good ones were a fluke, or if he just snapped due to toxins and is not himself anymore. But many believe it was Bruce Willis. This is because there is a confidential source who says that Bruce Willis secretly directed THE SIXTH SENSE and UNBREAKABLE.

Still, I’m gonna assume anybody who refers to Shyamalan as “Shamalamadingdong” or anything like that is a dumbass. Even if you can convince me it’s not some xenophobic shit where you gotta make fun of any name that doesn’t sound American it still reflects poorly on you. A guy who makes movies as bad as this and LADY IN THE WATER, you oughta be able to come up with something better than making fun of his name like a playground bully.

And before we pack it in for the evening I think we should all share in some possible alternate titles for THE HAPPENING. I would have to start with PLANT OF ATTACK. You could also go with PLANT 9. THE HILLS HAVE PLANTS.DON’T GO ANYWHERE NEAR THE WOODS. LEAF ME ALONE. ABSENT WITHOUT LEAVES. MAXIMUM OVERPLANT.

Hmmm, I thought this would be alot easier than it’s turning out to be. I was thinking you could just take any movie title or phrase with “me” in it and replace “me” with “tree.” But for some reason all the ones that come to mind are small indie movies that don’t sound real badass. For example YOU CAN COUNT ON TREE or TREE, YOU, AND EVERYONE TREE KNOW. Or if you find a phrase using “fallen” you can change it to “pollen.” But POLLEN ANGELS doesn’t work.

You know what – I think I got it. TREEVENGE. Yep, I’m sticking with TREEVENGE.

fiascos M. Night Shyamalan Mark Wahlberg
This entry was posted on Sunday, June 15th, 2008 at 8:02 am and is filed under Reviews, Thriller. You can follow any responses to this entry through the RSS 2.0 feed. You can skip to the end and leave a response. Pinging is currently not allowed.

14 Responses to “The Happening”