Here’s a little documentary not many of you will probaly bother to see, but I just saw it and I have to vouch for it. I know THE HIP HOP PROJECT sounds like a working title they never bothered to change, but it’s actually the name of the youth outreach program documented in the movie. This is the story of a guy in his 20s named Chris “Kazi” Rolle who finds some troubled teenagers with a talent for rapping and helps them record an album. It’s not only his way of keeping them off the streets, or giving them a voice for self expression, or even getting into their lives to be a mentor and a positive influence. It’s all of those things, but it seems like it’s also a form of redemption and self discovery for him, having been an orphan and a homeless criminal and still not having come to terms with where he came from.

Kazi lures these kids in with the promise of recording, and then he tells them the catch: you can’t talk about “money, hoes and clothes.” He wants them to talk about their lives, their problems, try to touch somebody emotionally, maybe change somebody’s life. We do see a scene of some rappers battling, insulting each other to each other’s faces, and it’s very entertaining. But Kazi is trying to get at something more sincere and from the heart. As an exercise he asks them to tell about something that has happened to them in their lives. This leads to an amazing scene where one of the kids rhymes (and I’m not clear whether he has had time to write this or if he is improvising) about his father. While he’s rhyming he starts to cry, his voice quivers, tears start pouring out. But he keeps going. I heard DMX gets tears on stage sometimes but I don’t know if he rhymes while crying. I never seen anything like it. 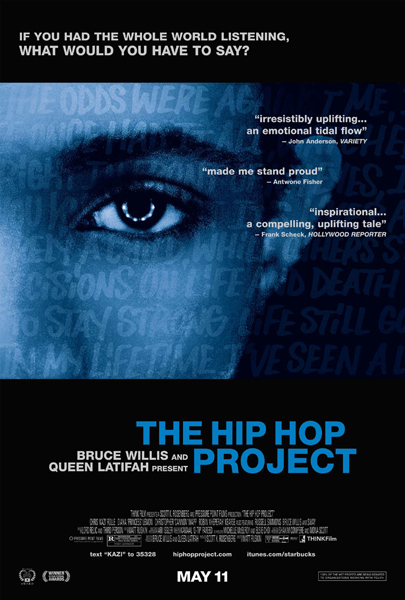 So then the movie starts to go into the lives of these kids. The girl whose dad got locked up 3 weeks before the movie started, the guy whose mom dies during the 4 years of the project and his landlord uses it as an excuse to evict him. You can see how having the album and the influence of Kazi keeps them going. The lyrics they write about their troubles sometimes sound a little forced, a little too much like an assignment, but sometimes they’re really good. The most powerful is probaly the song by Princess about the pain and guilt she feels over having had an abortion. That’s one topic I haven’t seen Little Jon or 50 Cents delve into yet.

When Kazi was growing up though, he didn’t have an album to work on. He tells how he was born in the Bahamas, and when he was about 3 his mom went to America. She was supposed to come back for him, and she didn’t. So he ended up in an orphanage, then a foster home, then as a teenager he started getting into trouble. So they wrote a letter to his mom. He was able to go to the U.S. to live with her, but he was acting out, so she threw him out, and that’s when he lived on the streets and started stealing to get by.

While helping these kids out, Kazi really starts to think about all these things. He takes a trip back to the Bahamas, visits these places from his past, meets with his foster mother and his social worker. When he comes back he decides that he can’t be telling these kids to heal unless he heals himself. He’s been trying to get to see his mother, then it finally happens.

This is the most tense scene I’ve seen in a documentary since Nick Broomfield walked into the prison to find Suge Knight in BIGGIE AND TUPAC. But it’s obviously alot more emotional. At first it seems like they’re just gonna catch up and pretend like everything’s okay. But Kazi forces himself to blurt out the question “Why did you leave me?” Somehow, his mom won’t admit any guilt, in her eyes she is the victim somehow. She refuses to apologize. He tries to explain how the trouble he got into as a kid came from being an orphan, trying to get attention. This isn’t an excuse, he knows this, he works with kids like that now, that’s what he does. But you can’t tell if this lady gets it or not. You look at her, she seems like a nice normal lady, but she fuckin abandoned her little boy. Left the country without him and never came back. And has convinced herself there was nothing wrong with that.

Faced with this, Kazi chooses not to tell her to fuck off. He came here to make progress. So he pulls a Jesus move: HE apologizes to HER for other things he did later, years after being FUCKING ABANDONED AS A BOY BY HIS OWN MOTHER. And sounds sincere.

This is not the only scene in the movie that I thought was amazing, but it’s the one that made the movie. Many adults will tear up. When the movie is not being inspirational, it can be pretty damn sad. But what’s sadder is watching it fall on deaf ears. I saw this with an audience full of teenagers who were excited at the beginning but got more and more restless as the movie got better. You never saw so much cell phone glow in one area before. Well into this scene where Kazi tries to understand why his mom abandoned him as a child, I saw a young dude turn around to tell his friends “This is weak.” Another kid had a similar reaction to the touching scene where Kazi hugs his woman after she’s accepted his marriage proposal.

I mean really, who wants to see that shit? Emotions? Love? Humanity? Come on! We want guns and gold chains and diamonds! Real men don’t fall in love and dedicate their lives to helping young people. Real men collect pretty necklaces and rings. Like 50 Cents or Liberace.

But I’ll try not to write off the entire generation based on the little bastards I see at the movies. I’m sure this movie could be inspirational to some kids, as it’s obviously supposed to. But I think it might work better for adults, showing what this Kazi guy has done and making you wonder why you’re not out there trying to help people.

The weirdest thing that happens in the movie is about a third of the way in, when Kazi realizes that the money he gets for his non-profit program Art Start is not enough to record the album. He has some fundraisers, makes alot of calls trying to find someone who can donate studio time. Suddenly, out of the blue, a studio is donated by Russell Simmons and… what the fuck?… a guy you all know from talkbacks, Motown recording artist Bruce Willis (The Return of Bruno, 1987, catalog #MOTC-6222). And Bruce actually appears briefly in the movie, giving Kazi a hug and doing a press conference with him to announce the deal. After that you don’t see him again but every once in a while you see a logo for what is now called Bruce Willis Art Start.

(Bruce is actually credited as executive producer of the documentary along with Queen Latifah.)

One thing the movie does not explain (because it’s not all that important to the main story) is how the hell Bruce ended up getting involved. It’s obviously a good cause but it’s just kind of a surprise that he would be the one to get involved in it. I never heard of Bruce having any interest in the hip hop, although as somebody pointed out in Harry’s “I just got off the phone with Bruce Willis” talkback, hip hop loves him. There have been many lyrics about Bruce, such as:

“Say you wanna battle, I’ma go forth / in a bunny suit like Bruce Willis in the underrated movie North”

I don’t want to be an asshole and overshadow this very good documentary by bringing up the whole PG-13 LIVE FREE OR DIE [to be determined] issue again, but I’m afraid it’s actually relevant here. You see, THE HIP HOP PROJECT was originally given an R-rating. Apparently the fuck word is used 17 times, and the more friendly variation of the Michael Richards word is used at least that much. But the filmatists appealed the rating, and they actually won! It was determined that the social merit of this movie overcomes the use of the fuck word and therefore fucking kids should be allowed to fucking see it without a fucking adult. (Kazi never would’ve had an adult to take him to the movies.)

Could this precedent also be used to release a real man’s DIE HARD as a PG-13? Well, no. But I do have to give the MPAA some credit for the first time in my life. I’m glad they could actually understand the concept that “fuck” is just a word people say, and they were able to judge the movie based solely on the content of its character, as Dr. King and John McClane would’ve wanted it, maybe.

Anyway, ratings and Bruce Willis aside, THE HIP HOP PROJECT is a good one. It will not blow you through the back of the theater, and it would be fine to see it on video. But you might consider going anyway, because according to the credits, 100% of the net profits will be donated to youth programs. The kind of programs that will keep kids off the streets and out of the movie theaters if and when we bite the bullet and pay to see a PG-13 DIE ****. Then maybe there will be less distraction from dipshits checking their phones and saying that McClane is “weak” for caring about his daughter.

If I was wearing a hat I would take it off right now in honor of the people who made this movie and especially to this Kazi guy, who should be an inspiration to all of us.

Bruce Bruce Willis hip hop
This entry was posted on Friday, May 11th, 2007 at 7:26 pm and is filed under Bruce, Documentary, Reviews. You can follow any responses to this entry through the RSS 2.0 feed. You can skip to the end and leave a response. Pinging is currently not allowed.