Holding the Razzies Accountable: Vern on the Other Great Awards Injustice

(Folks, this is, straight up, one of ScreenGrab’s proudest moments. We’ve been big fans of Outlaw Vern’s awesome reviews for quite some time. And now he’s a regular ScreenGrab contributor. Fuckin’ A. — BE) 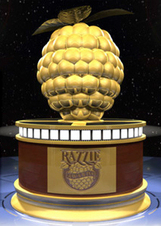 Okay, so at the Oscars Jerry Seinfeld pissed off the documentarians, the theater owners, and if I were one of those minimum wagers who have to clean up theaters I don’t think I’d be too happy with him either. We know you’re a millionaire bud, if the popcorn is too expensive just bring some caviar from home. But pick up your own garbage, asshole.

Me, I’m thinking bad thoughts about a different set of awards. Every year around Oscar season you see articles and discussions popping up about “when Oscar got it wrong,” usually pointing to The Unfortunate Dances With Wolves Over Goodfellas Affair as well as the career-long snubs of Hitchcock and Kubrick (please remember to delete references to Scorsese not having an Oscar before recycling that essay next year). Coinciding with those writings are the annual blurbs on the Golden Raspberries, which can be summed up as “ha ha, that crazy bitch Sharon Stone made a bad movie, ha ha.” You don’t usually see complaints about the Razzie people getting it wrong, but they do it all the time. I know it’s all supposed to be in fun and nobody really thinks about it too much, but still – these people have been getting attention this way for 25 years. Either we hold them to a certain standard or maybe it’s time we gave this smarmy tradition the gong.

I enjoy a good bad movie as much as the next guy. Probaly more than the next guy. I’m sure I’ve seen Road House more times than many of you, and I guarantee you I’ve seen On Deadly Ground (1995 Razzie winner, Worst Director, Steven Seagal) more than you have. Now maybe I’m laughing at these movies in places where it wasn’t intended, but I still have to admit that I am genuinely enjoying them. You’d think if bad movies was gonna be your thing for a quarter century you’d want to really love watching them, but that doesn’t seem to be the approach here. Instead it’s a much less clever version of the smug, superior attitude those wiseass puppets used to have on that show Making Jokes Over Old Movies Theater. My feeling is that if you’re enjoying the movie you oughta respect it at least a little bit. Who gives a shit what they were trying to do with Road House, the point is they ended up with a crazy over-the-top tone that nobody else has quite captured. I say give them credit, don’t point at them and call them retards. 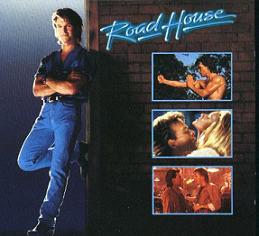 Of course, most of the Razzie targets aren’t as unique as Road House. The awards were founded by a publicist, so they’re an extension of that celebrity culture cycle – build them into royalty and then slit their throats. So it’s mostly obvious choices either with a bad reputation (Heaven’s Gate, Catwoman) or starring a major Hollywood star that people think is dumb (most often Sylvester Stallone). It’s easy to assume that most of the voters don’t actually see the movies, which is how an obvious choice like Basic Instinct 2 wins out over a more nuanced one like The Wicker Man.

And going after a favorite target takes precedence over an honest assessment of the movies, like when Bruce Willis was nominated Worst Actor for Armageddon. Now, I fucking hate Armageddon. If it were a person, I would consider it my enemy. I believe that Armageddon is a multiple stabbing of the art of action cinema, and that the language of action scenes are still scarred from the attack. But Bruce Willis didn’t do anything wrong other than to sign onto the fucking thing. It’s not a bad performance. How does he get the blame? Or Sylvester Stallone winning Worst Actor for Rambo. I don’t like that movie too much either, it’s such a blight on First Blood. But Stallone embodies that character with every cell in his body. The guy is not eloquent. The guy doesn’t have range. But the guy is fucking Rambo. You can’t tell me that’s a bad performance.

Reading through a history of Razzie winners and nominees, some of it seems like a witch hunt. Everybody hated Heaven’s Gate at the time so of course Michael Cimino had to get worst director. Prince got reamed for directing Under the Cherry Moon, which is actually not too bad a movie. Of course they had to join the pigpile on Sofia Coppola for Godfather III (her and Roberto Benigni are two of the “Worst New Star” winners who went on to acclaim and Oscars). Looking back, doesn’t it seem funny that the original Friday the 13th was nominated for worst picture? They didn’t know how good they had it.

There are a whole lot of movies and performances that I would argue those squares just don’t get: not just Showgirls but Charlie’s Angels: Full Throttle, Freddy Got Fingered, Milla Jovovich in The Fifth Element, and especially Marlon Brando in Island of Dr. Moreau. Yes, he was a weirdo in real life and in the movie. And that makes it bad acting? Put down the torch and the pitchfork and watch that movie again. It’s so full of hilarious insanity, almost definitely improvised, and clearly coming out of Brando’s unique mind. How can you not enjoy the part where David Thewlis is shocked by the animal-human hybrids at the dinner table and Brando thinks he’s talking about sunblock, or when the good doctor interrupts his big speech about genetic engineering to tell his little buddy Nelson de la Rosa to get his feet off of the table? The Razzies gave a “Worst Screen Couple” award to Brando and de la Rosa, but they called them “Marlon Brando and that ‘darn dwarf’.” 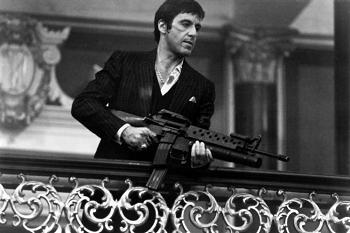 Go back further and you can see major lapses in judgment from early on. How the hell did Ennio Morricone’s eerie Carpenter-ish music for The Thing get nominated for Worst Musical Score? Maybe you can’t bring the record home and dance to it, but it sure is effective in the movie. Brian DePalma has been nominated for Worst Director three times, but not for Mission to Mars or anything like that. He was nominated for Dressed to Kill, Body Double and Scarface.

Scarface! I should report these assholes to the rapper union. I know some people don’t like the excess and cartoonishness of that movie, but worst direction? That scene where the chain saw’s about to hit flesh and the camera floats outside to show the lookouts flirting with a girl in a swimsuit? You think that’s the worst directing?

How about this one though: in the very first Razzie ceremony in 1981, another worst director nominee was Stanley Kubrick for The Shining. A quarter century later that’s still one of the scariest movies ever made. Razzie got it wrong.

I should probaly rest my case after that one but I think I have actually left my most damning piece of evidence for last. Clearly the Razzie foundation can be unfair, they can be thick, they can have bad taste. But their worst quality is their lame sense of humor. Sure, they have a point about Leonard Part 6, but how can we take their assessments of comedies seriously when they willingly use puns like “Basic Instinct 2, a.k.a. Basically, It Stinks, Too”? What is this, Cracked Magazine?

Since I don’t like the bitchy negativity of the whole thing, I will try to set an example by saying something positive about the Razzies. In 1995 they had a really good idea for a category, “Worst Written Film Grossing Over $100 Millon.” I’m not really sure how Twister beat out Independence Day in that category, but I’ll live. I was also really impressed that they nominated A Time To Kill. That movie is ridiculous but generally gets a pass since it’s a Schumacher-Goldmsan joint without rubber muscles or people dressed up in pink gorilla suits.

But if Matthew McConaghey’s appalling summation speech shouldn’t keep getting a pass, the Razzies shouldn’t either. Next year maybe we should leave the Razzies on the theater floor next to Jerry Seinfeld’s half-eaten hot dog and tobacco spit cup (or whatever it is that is so god damn difficult for him to carry to the garbage can after he’s done with it).

This entry was posted on Monday, March 5th, 2007 at 5:12 pm and is filed under Other Sites, Vern Tells It Like It Is. You can follow any responses to this entry through the RSS 2.0 feed. You can skip to the end and leave a response. Pinging is currently not allowed.

29 Responses to “Holding the Razzies Accountable: Vern on the Other Great Awards Injustice”