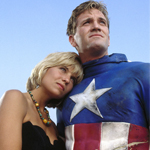 I don’t know if the young people know about this now, but in 1989 Tim Burton’s BATMAN (do people even watch that anymore?) was a gigantic explosion in pop culture. This was way back when “geek” was considered an insult and “actually some comic books aren’t just for kids they call them graphic novels” was considered interesting trivia. A movie about a super hero hadn’t been popular since SUPERMAN twelve years earlier, and that had seemed like an isolated incident. Now all the sudden the world was captivated by billboards and merchandise of just the bat symbol. It was on cereal boxes and racks of bootleg t-shirts in parking lots. Batman was worn by skateboarders, celebrated in weird Prince videos on MTV, welcomed back nostalgically in reruns of the ’60s comedy series starring Adam West. Intrigued newcomers picked up paperbacks of the groundbreaking ’80s work of dark Batman that were considered sacred texts from publication until the exact moment when musclebound Zack Snyder picked up the ball (the dodge ball?) and ran with it. END_OF_DOCUMENT_TOKEN_TO_BE_REPLACED

Seagal plays Jonathan Cold, “ex-CIA, current freelance operative specializing in covert operations and nuclear weapons intelligence.” He seems to be a bad guy because he’s hired to bust a guy out of prison and help him acquire the parts for a suitcase bomb. I never got the chance to realize this before but Seagal makes a good bad guy, always standing around, narrowing his eyes and grimacing like a henchman. He should look into that. END_OF_DOCUMENT_TOKEN_TO_BE_REPLACED