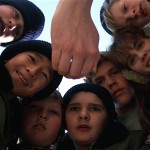 Miranda July, who wrote and directed and starred in this picture, apparently uses The Gift for performance art. Or video installations. Or something like that, I guess. But also for this movie. It’s one of those movies where you can tell she had a journal full of random ideas and then figured out how to string them all together. Alot of times a movie like that can be really good, because it feels so packed full of inspiration. AMELIE was a movie like that, where a million little Jeunet ideas were glued all over the top of a love story. In this one the ideas are less integrated, it’s more like a list of the ideas in movie form.

Like for example two almost-strangers who are attracted to each other are walking down a block to their cars. Their cars are in different places so they’re gonna separate at the end of the block, that’s the end of their relationship. So the guy points out that the “Ice Land” sign up ahead is the middle of the block, and represents the point where they realize their relationship is doomed. They flirt back and forth about whether that means they have six months together, or years before they get a divorce. Finally she says that the end of the block represents when they die of old age together. And they split up. (When they see each other shortly after she refers to it as the afterlife.)

So yeah, I’m afraid it’s that kind of shit. Words like quirky, the Sundance Film Insitute, etc. will come up. But guess what motherfucker? I think it works. The saving grace is that it always keeps a sense of humor. There are really no wrenching emotional moments or nothin. Most of the little things that happen are kind of funny. Like, a dude is packing up his things because he’s separating from his wife. He’s staring out the window at a bird in a tree. Then his wife hands him a painting of a very similar bird in a tree. Well, I guess you had to be there. Also there’s a part where a 6 year old kid pretends to be an adult in a chat room and starts talking about pooping.

(That was kind of weird how I said “guess what motherfucker?” at the beginning of that last paragraph. Seems kind of hostile but you know I gotta maintain some kind of masculinity while giving a positive review to a cute movie like this. asswipe.)

There are lots of goofy little ideas. Nothing gutbustingly hilarious but lots of amusing ideas. There’s an incident where a goldfish in a bag is spotted on top of a car, but they can’t say anything or the driver will stop and cause the bag to fall off and pop. There’s a little girl who collects kitchen appliances for when she gets married. Kids who draw pictures on their computers using punctuation. Discussions about random cute things like the way shoe salesmen will touch your shoe but never your foot. Yeah, I bet this movie would annoy the shit out of some people. I thought it would be me too, but somehow I was spared.

It helps that none of the characters are really portrayed as cool or hip. They’re all kind of dorks. The main dude is a just divorced shoe salesman with two kids. The other main character is Miranda July herself (think Zoe Deschanel with a little less va-va-VOOM). I should warn you that her character is some kind of video artist whose work you or I would never know how to appreciate. But they play it smart. I’m not sure she’s supposed to be a genius. She lives alone in what appears to be a single room apartment, talking to herself. And her job is driving elderly people around. Smartest move: she is rejected by the head of the modern art museum, a pretentious snobby woman like we would generally assume Miranda would be. They got the old joke where she sees a hamburger wrapper on the ground and doesn’t know for sure if it’s part of an art piece. But she notes that it’s very realistic. Also they have an upcoming exhibit at the museum described as “pictures of emails.”

The plot – obviously it is crucial to know what the plot is in a picture like this – is about the two main characters circling around the idea of dating each other. And then there are subplots about the kids, all of which are great actors. There is some real uncomfortable scenes where the kids are curious about sexuality. There’s no titillation though and no tits or pubes. Larry Clark was not available. It’s played real innocent, actually. More cute than sleazy, somehow.

While doing the intense research and preparation necessary to write a high class review like this, I happened to look on the imdb message boards. Always a mistake. Turns out some people think it’s child porn. Other people think it’s a work of genius and “artsy.” Other people think it’s boring pretentious plotless garbage, “the worst movie I’ve ever seen.” Both sides bring up Garden State, both as a positive and negative. Nobody told me that’s the yardstick you compare all movies to now. Some of the people obviously don’t enjoy movies that are lower budget or somewhat unorthodox, but they take it personally because they are afraid that people who do like those movies think they are dumb and don’t appreciate art. So then they assume that the people who do like the movies are snobs who only like it because they think it is supposed to be art but really they don’t like it. And then the people who actually do like the movie, although they are not like that, assume that the people who don’t like the movie only don’t like it because it is not a big science fiction movie with explosions. Star Wars part 3 was mentioned specifically.

I just want to say, I kind of liked the movie, I don’t give a rat’s ass if somebody thinks I’m smart or not, I liked star wars 3 better though. One thing I noticed in Star Wars 3 is during the big light saber battle on the lava planet at the end, there was some other guys there. You know, Obi Wan and Anakin are fighting on these lava platforms, and Anakin jumps up and does a flip and Obi Wan cuts off both legs and the one non-robotic arm in one swing. But what I noticed is, right before that happened they showed some weird alien or robot type guys on one of the platforms. They’re kind of hard to see but they’re there, they are workers on the lava planet. Their job is to stir the lava or something, I don’t know. I don’t know that much about the lava industry.

Anyway my point is, these two guys are just doing their job and they musta saw the whole thing happen.

“Those dudes, those jedis that were having a duel. He just chopped both the guy’s legs off!”

“Yeah, look at that. I think he got one of his arms too!”

“Oh jesus man, we better– I mean we can’t just leave him there.”

So then they float over there and they’re kind of afraid to do anything. One of them kind of timidly creeps up and he’s gonna poke Anakin with a stick or something. Then he panics. “Yeah, he’s breathing, he’s okay!” And they run off.

And then 2 years later Darth Vader comes in and steals all the lava for the Empire and these two don’t even make the connection.

You see that? You see what I just did? I observed shit is what I did. That’s what Miranda July does, only she observes shit from life, not movies. So I guess what I did was more like the fuckin clerks guy. Damn. Still, I could make a movie about it, or a video installation or something. But instead I made it into a movie review. ‘Cause that’s my thing.

John Hawkes Miranda July
This entry was posted on Thursday, September 15th, 2005 at 4:15 pm and is filed under Drama, Reviews. You can follow any responses to this entry through the RSS 2.0 feed. You can leave a response, or trackback from your own site.

One Response to “Me and You and Everyone We Know”