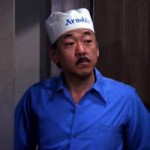 Swank plays Julie, a pouty, sullen teenage girl who lives unhappily with her grandma after the death of her parents. Anything anybody says to Julie, she takes offense and throws a hissy fit. You know how old people are, they try to be nice but they don’t really understand where your teenage mind is coming from, so they offer you some lemon bars or something and you’re like “GOD DAMN IT WHY CAN’T YOU JUST LEAVE ME ALONE?!” and run out of the room crying. So then Julie goes in and stabs grandma to death in her sleep, while jerkin off. Or was that a different movie? I can’t remember. 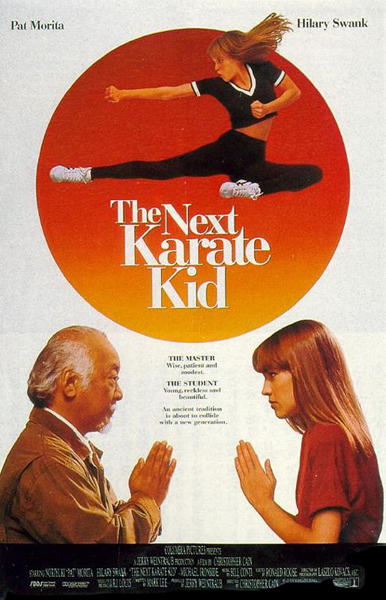 No, that’s right, I was thinking of Ken Park there. The grandma doesn’t get stabbed to death in this one (spoiler). This grandma wants to straighten Julie out, but she’s too smart to send her off to one of those teenage deprogramming ranches that Montel Williams would’ve suggested. Instead she accepts an offer from her old friend Mr. Miyagi to go stay at his garden while he looks after the teen.

You remember Mr. Miyagi, played by Pat Morita. He was nominated for best supporting actor for the original Karate Kid, but unlike his pupil, he went home in shame. If you are too young to know of the Karate Kid, I gotta explain that Mr. Miyagi was once a beloved character in American culture. He’s a short old guy who speaks in broken English and purposely annoys young people by getting them to wash his cars and crap like that. But they will soon see the wisdom behind his foolish appearance and how he is actually training them to be great fighters. And when shit goes down, like some bullies pick on him at the gas station, he will use his very slow and stiff Dolemite-like karate master skills to somehow whoop their ass.

Basically, he’s the non puppet version of Yoda. If you watch one of these movies, you will wish you could have a Mr. Miyagi for your household, but I don’t think they make them anymore.

This time though it’s Julie-San he’s training, not Daniel-San, so it’s a whole new chicken fight. Mr. Miyagi is about to face his most dangerous challenge yet… raising a teenage girl! So all kinds of hilarity can and will happen, like for example he walks into the room when she’s in her bra and gets all embarassed and covers his eyes, or he goes to buy her a prom dress and the saleswoman thinks he’s a crossdresser, or… well I guess that’s pretty much it. But those two things happen, so it’s a thrilling new twist in the Karate Kid saga.

When Julie goes out, you figure she’s got friends she can drink wine coolers with or something, but instead she has a secret place she goes to be alone. School! Not to learn, but to raise an injured hawk that she keeps in a cage on the roof of the building. Hard to explain. Anyway this is an unusual school because instead of a sports team, they have a group called “The Alpha Team,” which is basically a group of muscleman high school jocks in their ’30s who are trained in the fascist arts by the evil Colonel Dugan (Michael Ironside, obviously). It’s not really clear whether Colonel Dugan is an employee of the school district or just some neo-nazi maniac who hangs out on the athletic field. But if he’s an actual teacher I really hope the parents will write some letters of complaint when they find out about him blowing up a kid’s car and telling his students to “finish” another student. But that happens later.

This installment has no tournament or competition of any kind, basically all that happens is Miyagi wins over Julie, he brings her to a temple to learn life lessons from some lovable monks, and then at the end she has to fight the bad guys. (Okay, now is when the car blows up.) I gotta tell you I really questioned Miyagi’s wisdom in this scene. He’s supposed to be looking after this girl, and just because he’s taught her some minimal karate skills, he encourages her to fight some 35 year old murderous asshole with military training. He says she’s ready and there you go. I thought the dude was off his rocker. But you know what, Julie won the fight and in so doing convinced the other members of Alpha Team to quit their Aryan Youth ways. One of them even says, “I thought you had all the answers,” to Michael Ironside, shaking his head in disgust. So you see, Mr. Miyagi was right! It’s just like when he tells you to wash his car and you’re like, you fucking asshole, you’re supposed to be teaching me karate, and you’re making me do your fucking chores. But then you realize that actually, his car has magic powers that transfer to you when you spray water on it. Or something like that, I can’t remember, it’s been a while since I’ve seen the Daniel-San trilogy. So Miyagi was actually right to encourage her to risk her life to settle a score. Still, I hope her grandma doesn’t find out about this.

Man, what if Miyagi was wrong and these fascist assholes beat her to death? Maybe she woulda got that Oscar 5 years early but I’m not sure it would be worth it. Grandma would sue Miyagi for everything he had, he’d have to sell his garden, the monks wouldn’t accept him at their temple because he gave in to violence. So ironically he’d end up working at a car wash, where Daniel-San is assistant manager, and nobody ever listens to his wisdom anymore, they’re just like “Give me my fuckin change!” and shit like that. “I said I didn’t want wax! I’m not fuckin paying for this! Do you speak English?” Man that would be a bummer, I’m glad it worked out for Miyagi.

This movie isn’t all that interesting, but the one weird thing about it (other than the fact that only 5 years later this girl would have – and even deserve – an Oscar for best actress) is they seem to be going for this WWII theme. They make a big deal about Miyagi having fought for the Americans during WWII, not for Japan. And the fascist ways of the Alpha Team have obvious non-denominational nazi parallels. Miyagi tries to teach Julie-San throughout the movie that fighting is not cool because someone always gets hurt. He talks explicity against violence and war but, in true Billy Jack/Steven Seagal fashion, ends up more than once deciding that violence is necessary. So the movie is telling us, viewer-san, that there is no glory or honor or fun in fighting and war. Karate is for self defense. But when a bunch of fuckin nazis attack, that’s when you bust out the karate, or the tanks.

If only Miyagi’s message had been heard, we wouldn’t be in alot of this shit that we’re in these days. But the Michael Ironsides of the world are always fuckin it up. Thanks alot, assholes.

Christopher Cain Hilary Swank Michael Ironside Pat Morita Walton Goggins
This entry was posted on Thursday, March 3rd, 2005 at 12:59 am and is filed under Family, Martial Arts, Reviews. You can follow any responses to this entry through the RSS 2.0 feed. You can skip to the end and leave a response. Pinging is currently not allowed.

3 Responses to “The Next Karate Kid”